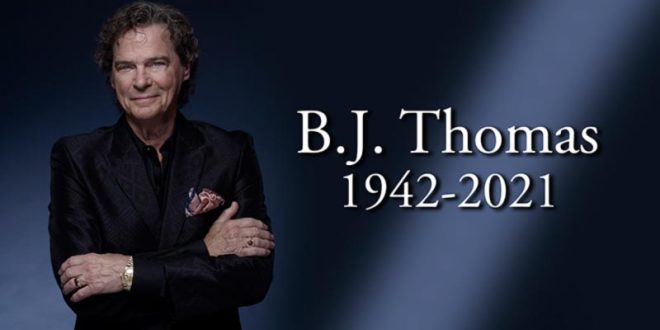 With his smooth, rich voice and unerring song sense, B.J. Thomas’s expansive career crossed multiple genres, including country, pop, and gospel, earning him CMA, Dove, and Grammy awards and nominations since his emergence in the 1960s.

Thomas’ career was anchored by numerous enduring hits, among them his million-selling cover of Hank Williams’ “I’m So Lonesome I Could Cry,” the Grammy-winning “(Hey Won’t You Play) Another Somebody Done Somebody Wrong Song” and the iconic “Raindrops Keep Fallin’ on My Head,” which won the Academy Award for best original song. A five-time Grammy award winner and Grammy Hall of Fame inductee, Thomas has sold over 70 million albums worldwide, scoring eight No. 1 hits and 26 Top 10 singles over his 50+ years in the music industry. His lengthy chart history led to him being named one of Billboard’s Top 50 Most Played Artists Over The Past 50 Years. Such memorable hits as “I Just Can’t Help Believing, “Don’t Worry Baby,” “Whatever Happened To Old Fashioned Love,” “New Looks From An Old Lover” and “Hooked on a Feeling” have made him a staple on multiple radio formats over the years.

Fellow artists mourn the loss of their friend and share fond memories that have left them forever inspired by the timeless, B.J. Thomas.

“One of the signs of true greatness in any of the arts is instant recognition of the creator. When you heard B.J. Thomas sing there was never a doubt who it was. RIP. Gone too soon but I will always know that voice.” – Paul Stanley

“My sincere condolences to the family of one of my favorite duet partners, B.J. Thomas. I will miss him as I know so many others will as well. Rest In Peace my friend.“ – Dionne Warwick

“So sad to hear of B.J. Thomas’ passing today. I was in touch with him three weeks ago and he seemed ready to fight his diagnosis. He was a kind and elegant gentleman and I will miss him, and his amazing voice. My love to his family.” – Richard Marx

“One of the greatest voices in pop music. My privilege to have B.J. Thomas on my show and play music with him. Gracious, humble, & his voice a remarkable gift from God. Condolences to his family.” – Gov. Mike Huckabee

“While we were working in Las Vegas, and B.J. was opening for us, we spent almost every night in each other’s room. We both had Texas roots, similar beliefs, and we loved finding and playing new songs to each other. The first time we met, we both talked over each other. It was just crazy. We had so much to say to each other that we were almost talking at the same time and it just became funny to both of us. We had so much fun together, getting to know each other in such a short time. Every time I saw him, we just picked up where we left off. I guess it will be that way in Heaven.” – Duane Allen, The Oak Ridge Boys

“The Oak Ridge Boys are devastated by the loss of a friend and a brother and one of the greatest voices to ever sing a song!!! As a young man B.J.’s biography and song called ‘Home Where I Belong,’ and his testimony of how Jesus Christ changed his life meant the world to me. A few years ago I shared that with him late one night over pizza on the Country Music Cruise. We cried and prayed together. I loved B.J. Thomas. There’s a Brand New Star up in Heaven tonight and we will miss you, man. Until the Promised Day.” – Joe Bonsall, The Oak Ridge Boys

“I was a huge fan of B.J. and his wonderful voice before I started recording, so I loved getting to know him when we were both having hits on United Artist Records early in my career. With all his great songs and career success, B.J. was always so nice and humble. It’s hard to say goodbye to an old friend. My heart is with Gloria and all of B.J.’s family.” – Crystal Gayle

“I’m really sorry to hear of the passing of B.J.Thomas. I hope he had a good life. I remember all the girls loved him.” – Don McLean

“I will always remember BJ Thomas as a special man, my friend, and a peer I’d known for decades. BJ had an enormously warm heart and a huge talent to match.” – Sam Moore

“B.J. Thomas not only had a great voice, but he was right for his time in the movie, Butch Cassidy and the Sundance Kid with the song ‘Raindrops Keep Fallin’ On My Head’ which was perfect for his career. I knew him personally and he was a wonderful human being. He will be sadly missed.” – Lee Greenwood

“I can’t believe that another great voice has gone silent. One of the reasons I became a singer was because of B.J. Thomas. It was after hearing his recording of “I’m So Lonesome I Could Cry.” I’m so thankful that our friendship through the years grew into a deep one. To say I’ll miss him is an understatement. My prayers and deepest sympathy go out to Gloria and their family. R.I.P. my dear friend.” – T.G. Sheppard

“Always loved working with B.J. Thomas. Such a unique voice, and always the professional. My sincere condolences to his family.” – Rhonda Vincent

“This first song I sang on the first gig I ever had in 1973 was “Raindrops.” I mimicked B.J. the best I could. I tried to sing just like him. He was my hero. I later had the honor to call him my friend and he made a great friend. Sheila and I are heartbroken, but we take comfort knowing that he is out of pain and now gazes upon the face of Jesus. Rest easy, my brother!” – T. Graham Brown

“B.J. Thomas has been a dear friend for many years. My heart is broken. Prayers for his family and wife Gloria. Love ya B.J.” – Johnny Lee

“B.J. Thomas was one of my personal favorites. One of the best singers that’s ever been. I wanted to record every song he ever did because they were great songs and his voice put them over the top. His music will live forever. I’ll miss him ‘Most of all’. Prayers and condolences to his wife and family.” – Doug Stone

“I loved and admired B.J. Thomas and his music long before I had the opportunity to get to know him while at a charity golf tournament in Texas. He was so kind and such a gentle soul. When he sang it was like reliving all those amazing memories and feelings that mesmerized me all my life, along with the rest of the world, all over again. Being in his presence, I could see why many musicians who played on B.J.’s early sessions spoke of his enormous charisma… which they said could only be compared to Elvis. The indelible mark he made in the world of music is iconic, but getting to know B.J. as a real friend was the greatest gift of all. He will truly be loved, missed and remembered forever.” – Deborah Allen

“Simply heartbreaking to hear of the passing of BJ Thomas. This loss will be felt not only in country music, but all genres. His music could fit in any programming, any event or music outlet. The same could be said about BJ himself. He was always dressed so sharp and appropriate for the occasion, and was so friendly to everyone he met. May this be his legacy.” – Jeannie Seely

Music editor for Nashville.com. Jerry Holthouse is a content writer, songwriter and a graphic designer. He owns and runs Holthouse Creative, a full service creative agency. He is an avid outdoorsman and a lover of everything music. You can contact him at JerryHolthouse@Nashville.com
Previous Luke Combs Scores 11th Consecutive #1 Single
Next RECORDS Nashville Signs George Birge