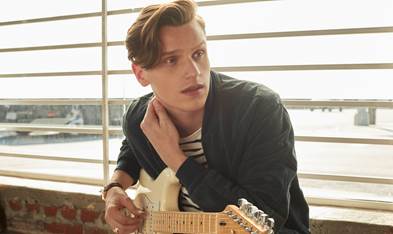 If you’re still at the Farm on Sunday (6/16), and we know you will be, go to The Who Stage at 3:45 and check out Patrick Droney. He’s got John Mayer good looks and guitar chops with a little old school blues pedigree. Check out his performance on NBC’s Late Night with Seth Meyers above.

The Nashville-based 26-year-old first picked up a guitar around age 6 and spent his formative years playing guitar on the road with blues and soul legends such as B.B. King and James Brown Foundation. Droney later went on to attend the prestigious Clive Davis Institute of Recorded Music, subsequently landing gigs with The Roots and Macy Gray, time in the studio with the legendary Glen Ballard, and a deal as a Fender artist ambassador. He released his self-titled debut EP last year, earning more than 10M streams and spawning his breakout track, “Stand and Deliver,” which garnered upwards of 100K streams in its first week and landed in the Top 10 on Spotify’s US Viral Top 50 chart.

Music editor for Nashville.com. Jerry Holthouse is a content writer, songwriter and a graphic designer. He owns and runs Holthouse Creative, a full service creative agency. He is an avid outdoorsman and a lover of everything music. You can contact him at JerryHolthouse@Nashville.com
Previous Granger Smith Loses Youngest Son In Tragic Accident
Next Photo Highlights From CMAfest Night One!