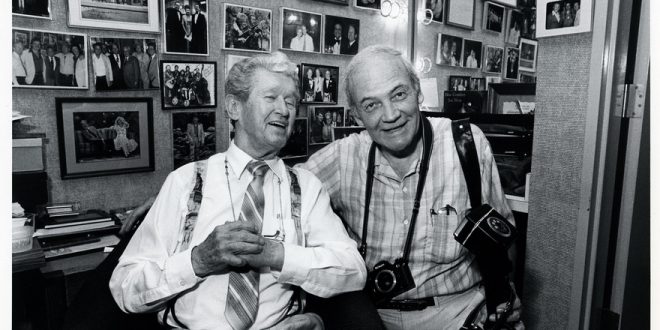 For the first time in its history, the doors to the famed Acuff House, the home built for Roy Acuff in the shadow of the Grand Ole Opry House, are open to showcase the limited-time exhibit Family Reunion: The Opry Family Photo Album. The exhibit, which opens today and runs through October 31, provides an intimate behind-the-scenes look at the Opry through the photography of 32-year Opry staff photographer Les Leverett. The photographer befriended and captured images of genre-defining stars including Acuff, Garth Brooks, Johnny Cash, Patsy Cline, Loretta Lynn, Dolly Parton, Minnie Pearl, and more.

Leverett’s work has also been featured on hundreds of album covers. Among his many honors are a Grammy Award for best album cover photography for Porter Wagoner’s 1966 album “Confessions of a Broken Man” and Billboard’s Best Country Cover for Dolly Parton’s 1973 album “Bubbling Over.”

The Grand Ole Opry Archives acquired thousands of slides, prints, negatives, and color transparencies from the Les Leverett collection in February 2017. The collection contains thousands of images that have never before been printed or published as well as Leverett’s handwritten notes pertaining to dates, locations, and subjects depicted; press clippings; and a homemade, typewritten index that contains additional details.

“We are delighted to be able to showcase even a small portion of the incredible work Les Leverett produced during his 32 years with the Grand Ole Opry,” said Colin Reed, Ryman Hospitality Properties Chairman and CEO. “These photographs are of paramount importance to country music history and to our company’s heritage. We take very seriously our job as caretakers of this collection and look forward to some of the collection’s truly incredible photographs being seen by fans around the world.”

The Acuff House will also share the story of Acuff, heralded as the King of Country Music, through artifacts and videos highlighting his 50-plus years as the consummate showman on the Opry stage. Acuff lived in the home built for him by the Opry from 1983 until his death in 1992.

Acuff House tours can be purchased as part of tour packages also including Grand Ole Opry House backstage tours. Packages will be available seven days a week based upon Opry House availability. Additional package information is available at opry.com and by calling 1-800-SEE-OPRY.

Music editor for Nashville.com. Jerry Holthouse is a content writer, songwriter and a graphic designer. He owns and runs Holthouse Creative, a full service creative agency. He is an avid outdoorsman and a lover of everything music. You can contact him at JerryHolthouse@Nashville.com
Previous Maddie & Tae Release First Single From Sophomore Album
Next Craig Morgan Completes Tenth USO Tour