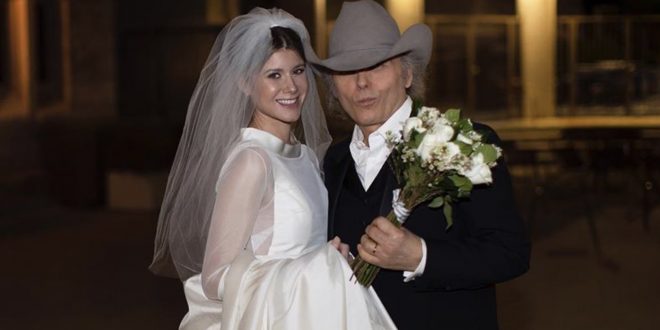 Dwight Yoakam recently revealed that he married his longtime girlfriend Emily Joyce last month. The two have been an item for a decade and engaged for several years. The 63 year-old honky tonk hero said this in a press release: “At a time when there is so much uncertainty in the world, there are still happy moments. In the face of shutdowns and social-distancing requirements, love prevailed.” The happy couple had an intimate, private ceremony at St. Monica Catholic Church in Santa Monica, Calif. with less than ten witnesses who sat six feet apart from each other. Yoakam and Joyce kept quiet about their marriage ceremony “out of respect to so many people affected by and on the front lines of this pandemic.”

Since his wedding, Yoakam has continued hosting his radio show on Sirius XM interviewing fellow stars including Post Malone, Bob Weir, Jakob Dylan, and many others. Yoakam has recorded more than twenty albums and compilations, charted more than thirty singles on the Billboard charts, and sold more than 25 million records.

Music editor for Nashville.com. Jerry Holthouse is a content writer, songwriter and a graphic designer. He owns and runs Holthouse Creative, a full service creative agency. He is an avid outdoorsman and a lover of everything music. You can contact him at JerryHolthouse@Nashville.com
Previous Kenny Chesney Enlists Songwriters For Album Release
Next International Songwriting Competition Announces 2019 winners