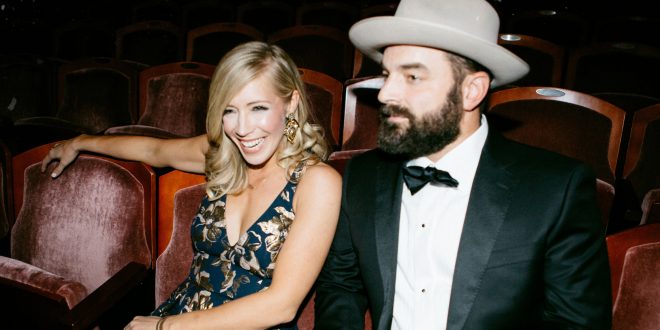 Set to take place once again at two beautiful & historic venues in Tennessee, the Holcombs have announced their annual Drew and Ellie Holcomb’s Neighborly Christmas Shows in Ellie’s hometown of Nashville (Schermerhorn Symphony Center, Dec. 9) and Drew’s hometown of Memphis (The Orpheum, Dec. 7).

Earlier this year, Drew and Ellie teamed up for their first ever joint EP, Electricity, which was released on January 11, 2019 and featured two new original songs, “Electricity,” (video above) and a cover of Willie Nelson’s classic “On The Road Again.”

The Electricity EP followed 2018’s “You and Me” – the Holcombs’ first single together since Ellie stepped back from touring and recording with Drew Holcomb and The Neighbors six years ago upon the arrival of the first of their three beautiful children. In addition to continuing their annual tradition of Neighborly Christmas Shows in Tennessee, Ellie is also featured on Drew Holcomb and The Neighbors’ forthcoming album Dragons, which is due out on August 16th via Thirty Tigers. This September, they’ll hop on stage together for a Drew & Ellie Holcomb set at Moon River Music Festival, the festival that Drew Holcomb founded in 2014 and continues to curate.

Music editor for Nashville.com. Jerry Holthouse is a content writer, songwriter and a graphic designer. He owns and runs Holthouse Creative, a full service creative agency. He is an avid outdoorsman and a lover of everything music. You can contact him at JerryHolthouse@Nashville.com
Previous WATCH: Carrie Underwood Surprises Jackson Elementary School Choir
Next Janie Fricke Announces 2 CD Greatest Hits Compilation