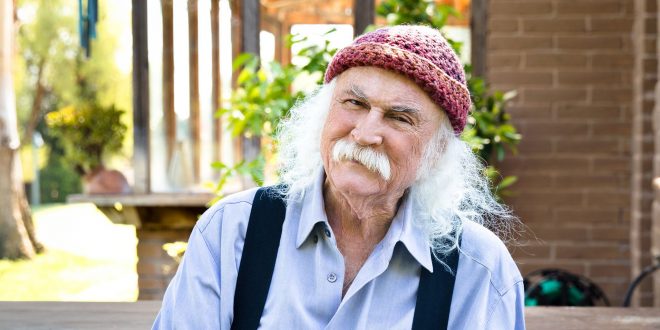 David Crosby announced his new album For Free will be out July 23 rd via BMG. For Free will be Crosby’s fifth full-length album release in the last seven years, and the lead single “River Rise” is an uplifting song featuring Michael McDonald. The lyric video (above) features a whimsical animation juxtaposed against images of natural beauty.

Arriving just a month before his 80th birthday, For Free finds Crosby continuing to tap into the surge of creativity he’s experienced since the making of his 2016 album Lighthouse, this time collaborating with the likes of McDonald, Donald Fagen of Steely Dan, and multi-Grammy Award-winning artist Sarah Jarosz. With a transcendent quality that lies somewhere between poetry, prayer, and wild-eyed rock-and-roll, For Free yet again reveals Crosby’s rare gift for imparting essential truths with both undeniable warmth and a profound sense of wonder.

Made with his son James Raymond (a multi-instrumentalist who also served as the album’s producer), For Free features a number of the musicians who joined Crosby on 2017’s Sky Trails, including saxophonist Steve Tavaglione and drummer Steve DiStanislao. Co-written by Crosby with Raymond and McDonald, “River Rise” opens the album with a display of harmonies. “‘River Rise’ came from wanting to write something very evocative of California, but almost with a country-song perspective—something that speaks to the empowerment of the everyman or everywoman,” says Raymond.

Although much of the album encompasses the grooves signature to the Sky Trails Band sound, its title comes from Crosby’s sparse cover of a Joni Mitchell classic he’s returned to many times over the years. “Joni’s the greatest living singer/songwriter, and ‘For Free’ is one of her simplest,” notes Crosby, who’s accompanied by Jarosz on the track. “It’s one of my favorite songs because I love what it says about the spirit of music and what compels you to play.” True to the original version, “For Free” unfolds in a delicate piano-based arrangement, with Jarosz and Crosby’s voices channeling awe and sorrow to spellbinding effect.

Music editor for Nashville.com. Jerry Holthouse is a content writer, songwriter and a graphic designer. He owns and runs Holthouse Creative, a full service creative agency. He is an avid outdoorsman and a lover of everything music. You can contact him at JerryHolthouse@Nashville.com
Previous Bluebird Cafe & The Ryan Seacrest Foundation Team Up For Pediatric Patients
Next Tyler Farr Takes A Stand Against Domestic Violence In “Cover Girl”