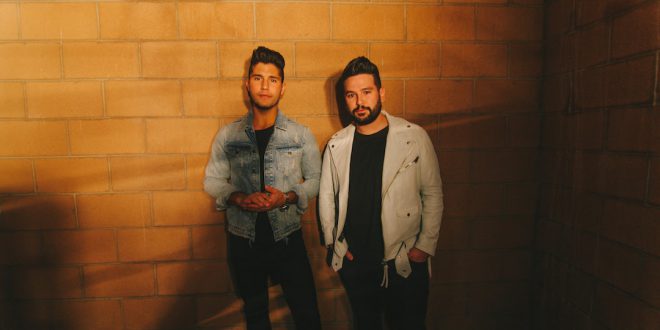 Recently nominated for ACM “Duo of the Year,” Dan + Shay (Dan Smyers and Shay Mooney) achieve another milestone as “Tequila” becomes one of three country songs on Spotify’s Today’s Top Hits playlist. The music service’s largest playlist boasts more than 19 million followers, expanding the hit duo’s reach in addition to their slot on Spotify’s Hot Country playlist with more than 4.5 million followers. Released in January, “Tequila” tallies over 31 million on-demand streams, making it one of the Top 20 most streamed country songs of 2018, and is quickly rising through the Top 40 at country radio.

Written by Smyers alongside Jordan Reynolds and Nicholle Gaylon, “Tequila” earned a Top 5 spot in Australia and summited the iTunes Country Charts in the U.S., U.K. and Ireland upon release. Dan + Shay performed the tune last week at CMC Rocks to packed crowds, marking their first time in Australia. The accompanying video, conceptualized by Smyers with director Patrick Tracy, has already amassed over 6.8 million views. Nyle DiMarco, notable deaf activist and model, stars in the video along Mica Von Turkovich.

“We’ll never forget our first visit to Australia, especially hearing 20,000 country music fans sing ‘Tequila’ back to us,” shared Smyers. “To top it all off, Spotify added the song to Today’s Top Hits!  It’s always exciting when new listeners discover our music.”

Dan + Shay have scored multiple No. 1’s including Platinum-certified “From the Group Up,” and Gold-certified “Nothin’ Like You” and “How Not Too.” “Tequila” serves as the first single from Dan + Shay’s forthcoming third studio album, expected for release later this year. Continuing their momentum, Dan + Shay will join Rascal Flatts this summer on their Back To Us Tour.

Music editor for Nashville.com. Jerry Holthouse is a content writer, songwriter and a graphic designer. He owns and runs Holthouse Creative, a full service creative agency. He is an avid outdoorsman and a lover of everything music. You can contact him at JerryHolthouse@Nashville.com
Previous Billy Dean’s Thank You To Billy Graham Reaches 10 million people
Next Cowboy Troy Releases New Single “As Long as It’s in Texas”