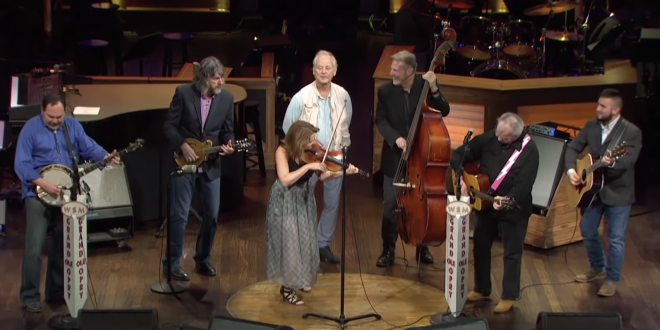 Actor and comedian Bill Murray made an unannounced visit to the Grand Ole Opry on Tuesday night (Sept. 25). Murray was not the only surprise guest. John Prine and Murray joined the SteelDrivers for a performance of Prine’s song “Paradise,” much to the crowd’s delight.

The Tennessean reported that Murray was spotted at the Nashville airport on Monday, helping travelers to their cars.

Murray and the SteelDrivers’ met in 2009, when they both appeared in the movie Get Low and have stayed in touch ever since.

Tuesday was also Tyler Rich’s Grand Ole Opry debut. On Twitter, the Rich shared a photo from the big night and said, “It was both mine and Bill Murray’s #opry debut tonight.”

Music editor for Nashville.com. Jerry Holthouse is a content writer, songwriter and a graphic designer. He owns and runs Holthouse Creative, a full service creative agency. He is an avid outdoorsman and a lover of everything music. You can contact him at JerryHolthouse@Nashville.com
Previous Southern Soul-Rocker, JJ Grey At 3rd & Lindsley on November 7
Next 2018 SOURCE Hall of Fame Awards Held at Musicians Hall of Fame