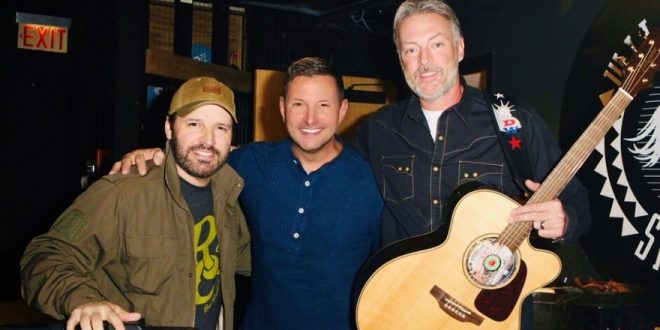 The Country Music Association celebrated its 60 th anniversary Wednesday evening with an invite-only industry party at the Wildhorse Saloon in Nashville. Throughout the night, more than 20 acts performed 60 years of Country hits, backed by Joe Denim and an All-Star Band.
After welcoming remarks from CMA Chief Executive Officer Sarah Trahern, Jeannie Seely kicked off the evening with a stunning performance of “Who Needs You.” Michael Ray and Craig Wayne Boyd performed back-to-back Merle Haggard classics, with Ray singing “Okie from Muskogee” and Boyd singing “The Fighting Side of Me.”
Halfway to Hazard performed Montgomery Gentry’s “My Town” in a moving tribute to Troy Gentry, while Hilary Williams, daughter of Hank Williams Jr., performed her father’s “Old Habits.” Backstage, Lee Greenwood and Larry, Steve & Rudy, The Gatlin Brothers, sang an impromptu version of Greenwood’s hit “God Bless The U.S.A.,” which the Gatlin Brothers provided background vocals for on the original 1984 recording.
Artists joined Trahern and CMA staff on stage for a birthday toast and sing-a-long rendition of “Happy Birthday.” Lee Brice closed the evening with a stellar performance of Hank Williams Jr.’s “Family Tradition.” See below for the full setlist.
Setlist:
Jeannie Seely – “Who Needs You” (1960)
Larry, Steve & Rudy, The Gatlin Brothers – “Houston (Means I’m One Day Closer To You)” (1983) & “All The Gold In California” (1979)
Michael Ray – “Okie From Muskogee” (1968)
Craig Wayne Boyd – “The Fighting Side of Me” (1970)
Joe Denim & Danielle Peck – “You’re the Reason Our Kids are Ugly” (1978)
Mark Wills – “The Gambler” (1979)
Hilary Williams – “Old Habits” (1980)
TG Sheppard & Kelly Lang – “Islands in the Stream” (1983)
Lee Greenwood – “God Bless The U.S.A.” (1984)
Ty Herndon – “Living In A Moment” (1996)
Mark Collie – “Even The Man In The Moon Is Crying” (1997)
Jamie O’Neal – “There Is No Arizona” (2001)
Halfway to Hazard – “My Town” (2002)
Mark Wills – “19 Somethin’” (2002)
Darryl Worley – “Have You Forgotten?” (2003)
Julie Roberts – “Break Down Here” (2004)
Chuck Wicks – “Stealing Cinderella” (2008)
Michael Ray – “One That Got Away” (2018)
RaeLynn – “Tailgate” (2018)
Lee Brice – “Songs In The Kitchen” (2017), “I Drive Your Truck” (2013), and “Family Tradition” (1979)
Founded in 1958, the Country Music Association is the first trade organization formed to promote a type of music. The organization, which started with 160 members, has grown to more than 7,400 industry professionals around the world representing every aspect of the business. The organization’s objectives are to serve as an educational and professional resource for the industry and advance the growth of Country Music around the world.

Music editor for Nashville.com. Jerry Holthouse is a content writer, songwriter and a graphic designer. He owns and runs Holthouse Creative, a full service creative agency. He is an avid outdoorsman and a lover of everything music. You can contact him at JerryHolthouse@Nashville.com
Previous The Mavericks to Perform with Nashville Symphony
Next Where to Next? The Ultimate Adventure Race Coming to Nashville