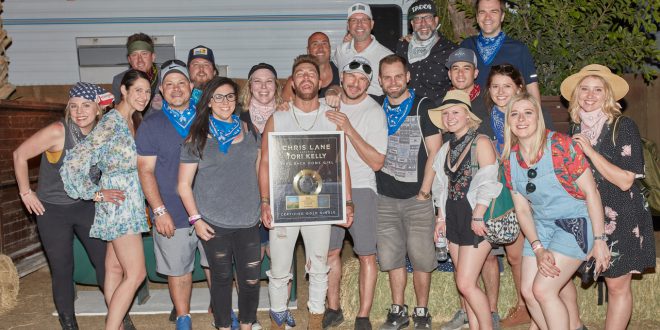 Moments after he “got the crowd going” with his Stagecoach debut, Big Loud Records star Chris Lane was surprised with a GOLD plaque commemorating 500,000 sales and streams of his current single “Take Back Home Girl” featuring Grammy-nominated artist TORI KELLY. The track has been certified GOLD in both the U.S. and Canada by the RIAA, while garnering a striking 100 MILLION combined streams and ascending into the Top 15 on Billboard’s Country Airplay chart.

“I can’t think of a better way to kick off album number two than with a gold single. The response on ‘Take Back Home Girl’ has been the biggest of my career and I’m so excited to share this moment with my team,” says Lane. “I definitely want to shout out to Tori Kelly, she’s an amazing singer and the perfect fit for this song. Having her be part of it makes it even more special.”

Music editor for Nashville.com. Jerry Holthouse is a content writer, songwriter and a graphic designer. He owns and runs Holthouse Creative, a full service creative agency. He is an avid outdoorsman and a lover of everything music. You can contact him at JerryHolthouse@Nashville.com
Previous Brice Long Set To Release Mother’s Day Tribute
Next Ole Red Hires Garrett Pittler as Executive Chef