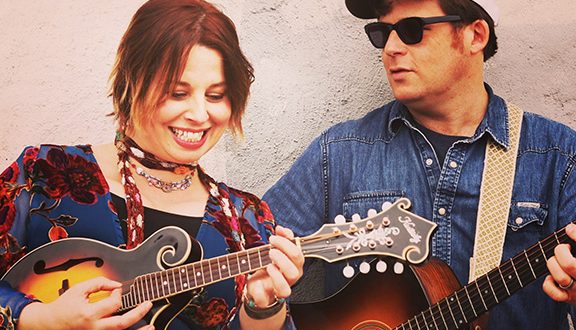 Since marrying in 2013, Chris and Adam Carroll have been touring together, first as co-headliners then quickly developing a natural chemistry as a duo. With years of touring in that capacity under their belt, a duo album became a must not just from the creative aspect, but by demand from the fans. In addition to the shows together, the pair have been co-writing songs that exhibit the magic that both of them possess as songwriters. Recorded mostly in one day last winter, Good Farmer, captures the spirit of the live show and is masterfully produced by long time Adam Carroll producer, Lloyd Maines.

Starting the album is a song that was written years ago by Adam and Scott Nolan, “Hi-Fi Love”. Presented here as a duet between Chris and Adam, the song has gone to new heights and the playfulness of the lyrics seems expanded with the back and forth between the two. The first single, and title track is a co-write between the two, a celebration of all the nurturing women Chris has met throughout her life that was inspired by Errol Loudsberry’s (of “Errol’s Song” fame) top place in the hierchy of humankind, the “Good Farmer”. Further on in the album are a tribute to Chris (“Tough As Nails”) and immediate love (”Love You Already”).

After meeting a fan who collected songs about women named “Louise” and claimed there are more than 250 of them, the Carroll’s decided to add one more. Adam handles the lead vocals on this one, but the song really showcases the vocal harmonies the two have mastered. “Angel In God’s Country”, co-written by Chris and Michael O’Connor, sheds a beautiful light on people that have healed from a rough life. At the end of the album is “Take Me Away”, a song that Adam wrote with John Evans nearly 20 years ago that was cut by Hayes Carll on his breakout album, Little Rock. Here it is given new life by Chris’s lead vocals and mandolin playing, accompanied on fiddle from Dennis Ludiker (Asleep At The Wheel).

“We had so much fun making this project and it’s been a long time coming. We’ve built up a dedicated fan base after the last few years of touring and we wanted this album to be a reflection of our live show. Lloyd Maines and Pat Manske we’re able to capture the songs in one day because we had really honed them out there on the road. We hope that you enjoy it and thanks for all that you do to spread the word about our music.” said The Carrolls.

Music editor for Nashville.com. Jerry Holthouse is a content writer, songwriter and a graphic designer. He owns and runs Holthouse Creative, a full service creative agency. He is an avid outdoorsman and a lover of everything music. You can contact him at JerryHolthouse@Nashville.com
Previous Alabama to Perform Their Final “50th Anniversary Tour” Show in Nashville
Next Listen: North Mississippi Allstars, “What You Gonna Do?”