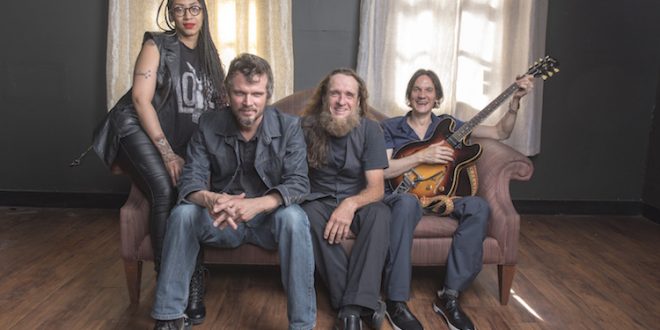 Listen: North Mississippi Allstars, “What You Gonna Do?”

North Mississippi Allstars are set to return with Up and Rolling on October 4th via New West Records. The 12-song set was produced by Luther and Cody Dickinson and recorded at The Zebra Ranch, their family studio established by their father, the legendary Jim Dickinson in Independence, MS. The album also features guest appearances from Mavis Staples, Jason Isbell, Cedric Burnside, Duane Betts, and Sharde Thomas. Up and Rolling finds North Mississippi Allstars getting back to their roots and recapturing the communal spirit upon which the band was founded.

Today, Paste Magazine has premiered “What You Gonna Do?” featuring Mavis Staples. The song originally appeared on The Staples Singers’ essential 1965 album Freedom Highway. While speaking with Paste, Luther Dickinson said, “Freedom Highway became one of the records that changed my life. Pulled from my father’s record collection, this music recorded live in a Chicago church, transported me into a live church service with The Staples Singers with drums and bass! This did not sound like my grandmother’s Baptist church. This gospel was so beautiful, yet funky. ‘What You Gonna Do?’ is the bluest gospel song I have ever heard.” Listen to “What You Gonna Do?” Featuring Mavis Staples above.
A forgotten roll of film inspired a musical accompaniment, the North Mississippi Allstars’ new record Up and Rolling. Shot before the turn of the century, the photographs resonate with the music of four families from the Mississippi hills. The music “is the sound of modern Mississippi,” says Luther Dickinson.

In 1996, a photographer from Texas, Wyatt McSpadden, traveled to North Mississippi looking to photograph local musicians. Brothers Luther and Cody Dickinson had grown up just south of Memphis and cut their teeth playing experimental rock & roll together, as well as the roots repertoire pioneered by their father, Jim Dickinson, a legendary producer (Big Star, the Replacements) and session player (Rolling Stones, Bob Dylan). Their feet were firmly planted in the North Mississippi mud and music scene, and they were excited to show Wyatt around their community, to introduce him to the musical families of Otha Turner, RL Burnside and Junior Kimbrough. “Wyatt was so smooth nobody felt he was taking photos,” Luther recalls. “No one was self-conscious or posing. Wyatt had a cloak of invisibility.”

A month after McSpadden took those photos, the newly formed North Mississippi Allstars made their Memphis debut, incorporating their father’s concept of roots music as a framework for improvisation and blending experimental/psychedelic excursions into Hill Country anthems. In just a few short years, their lives would then be forever changed with the release of their debut album Shake Hands with Shorty in 2000. They wouldn’t see most of the photos for over two decades until McSpadden tracked the brothers down in 2017. Luther says, “The images stopped me in my tracks and blew my mind. The music that changed our lives was captured in these photographs. Cody and I wanted to set the music free and record an album to accompany these photographs illustrating what Mississippi music sounded like in 1996 – and what it sounds like now.” Up and Rolling takes listeners on a tour of this vibrant and rural community: through the hills and along the back roads to Otha’s home, to Junior Kimbrough’s nightclub, and RL Burnside’s house parties.

Along with their originals, they covered some of their favorite songs by these local heroes, with help from Cedric Burnside and Sharde Thomas, Otha Turner’s granddaughter. “She was only a child when she became his apprentice and heir to the bamboo throne of fife and drum music,” says Luther. “Now she’s the Queen of the Hill Country and my favorite singing partner.” In addition to duetting with him on RL Burnside’s raunchy “Peaches,” she also sings with Luther on Otha’s “Call That Gone.”

Mavis Staples keeps NMA marching on the freedom highway, singing on her family’s classic “What You Gonna Do?.” Jason Isbell appears on a tune that has been in the Dickinson family for years: “Our father recorded ‘Mean Old World’ with Duane Allman and Eric Clapton during the Layla sessions. Jason invited me to record an acoustic, slide guitar duo version. Cody came up with the new arrangement and wanted to record an electric version with Jason and Duane Betts, using ‘Mean Old World’ as a vehicle to lay down an epic statement about modern-day roots rock guitar.”

Luther hopes, “the boogie is rooted, but spreads evasively from the kudzu jungle grown-over Junior’s concrete slab and Otha’s porch boards through the Zebra Ranch’s razor wire chain link fence. Transcending time and space, the music reaches out into the dark of night like the wisteria vine, looking for free-hearted souls to latch onto and wedge into the foundations of hate, slowly tearing down walls a generation at a time.”

In 23 years, North Mississippi Allstars have released ten acclaimed studio albums, three of which were nominated for Grammy Awards in the Blues Album of the Year category. Luther Dickinson has also garnered another four Grammy Award nominations in various categories as well. They have also shared stages with Robert Plant, Mavis Staples, Patty Griffin, John Hiatt among many others.

Up And Rolling will be available across Digital Retailers and is available for Pre-Order Now via New West Records. Look for the North Mississippi Allstars at the Ryman Auditorium on July 19th in Nashville.

Music editor for Nashville.com. Jerry Holthouse is a content writer, songwriter and a graphic designer. He owns and runs Holthouse Creative, a full service creative agency. He is an avid outdoorsman and a lover of everything music. You can contact him at JerryHolthouse@Nashville.com
Previous Chris & Adam Carroll Set To Release “Good Farmer”
Next MusicRow Awards Honors Nashville’s Music Industry Talent