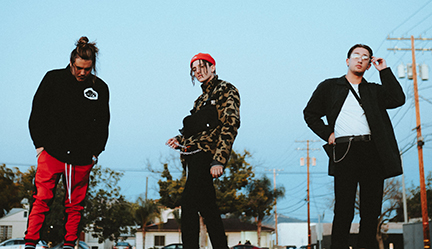 If you’re a fan of of Post Malone, The Neighbourhood, The 1975, or The Weeknd you need to check out trio Chase Atlantic.

From humble beginnings in their Northeast Australia hometown to worldwide acclaim and ferocious sets on some of the planet’s biggest stages, the alt-pop trio The Weeknd are riding high on a wave of their own creation. And with the release of their  sophomore full-length, Phases, on the heels of their Don’t Try This  EP, 2019 looks to be their biggest year yet.

Mitchel Cave and his older brother Clinton formed Chase Atlantic with their best friend, Christian Anthony, in 2014. Classically trained as musicians and singers, the brothers began their obsession with programming and production as teenagers. Spending days locked away in their bedrooms working on beats, they began combining sounds from their favorite genres—from pop to electro to rock and R&B—fusing together an experimental sound that retained catchiness and hooks. Adding live instrumentation and vocals to the mix, the trio recognized their work’s undeniable groove and edge, an eclectic and unique hybrid of dark, rhythmic, and emotional sound—not to mention their shared bond and ability to make singular decisions as a hive mind.

“We’re on the same wavelength,” Mitchel says. “We have the same outlook and that’s why we’ve been such great friends for such a long time. Our music-making is synergistic; we all share the same musical brain. We make music that is hard to define by genre but easy to enjoy.”

They began releasing their music online and quickly developed a following in their home country, with fans flocking to their infectious live shows and embracing the confident honesty in their storytelling. The viral single “Friends” caught the ears of Good Charlotte’s Joel and Benji Madden, who signed Chase Atlantic to their esteemed LA-based music company, MDDN, in 2016. They released a pair of EPs and a self-titled debut LP in 2017, leading to a string of sold-out headline shows and tours around the world, including festival slots at Lollapalooza, Bonnaroo, Firefly, Reading & Leeds, and Vans Warped Tour. Despite all the rapid-fire success, the band work hard to maintain and increase their high-level work ethic, sticking to their guns when it comes to their method of making music and refusing to compromise any of their creativity, control, or—most importantly—their joy.

“This album feels as though it is truly a work of astronomical measures,” he says. “It’s the first time we were able to honestly and openly hone into something so monumentally special and raw without compromising even an inch of our integrity as artists. We’ve developed a completely new sound within a matter of months that has never been tapped into before. Chase Atlantic is now dwelling within a realm of its own; it’s both scarily isolating and blissfully euphoric at the same time. Welcome to a whole new era.”

The band will be coming to Nashville to headline Exit/In on Tuesday on 6/18. Check ’em out.

Music editor for Nashville.com. Jerry Holthouse is a content writer, songwriter and a graphic designer. He owns and runs Holthouse Creative, a full service creative agency. He is an avid outdoorsman and a lover of everything music. You can contact him at JerryHolthouse@Nashville.com
Previous T. Graham Brown And Wife To Be Crowned 2019 RC Cola and Moon Pie King and Queen
Next Charlie Daniels‘ “The Devil Went Down to Georgia” Turns 40