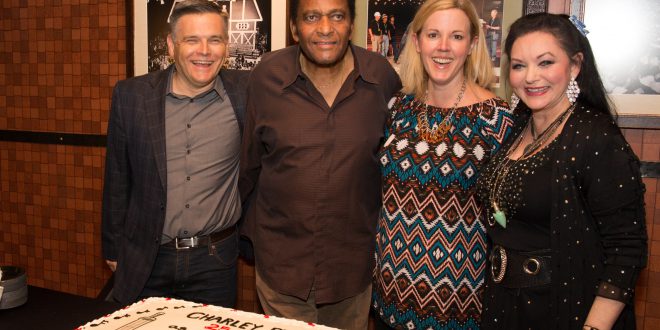 Country Music Hall of Fame member and Recording Academy “Lifetime Achievement Award” recipient Charley Pride celebrated his 25th Anniversary as a Grand Ole Opry member with appearances on the Opry this weekend. Pride, who made his Opry debut in 1967, performed extended Opry sets in celebration of his milestone anniversary. Opry flagship station 650 AM WSM/wsmonline.com saluted the award-winning artist with a “Country Pride Weekend.”

Upon his Opry induction 25 years ago, Pride recalled his initial dream of baseball stardom. “It’s as if I had made it in baseball and they came up to me and took me to Cooperstown and said, ‘This is where your plaque is going to be – beside Babe Ruth, Lou Gehrig, Jackie Robinson, and Hank Aaron.”

Music editor for Nashville.com. Jerry Holthouse is a content writer, songwriter and a graphic designer. He owns and runs Holthouse Creative, a full service creative agency. He is an avid outdoorsman and a lover of everything music. You can contact him at JerryHolthouse@Nashville.com
Previous Danielle Bradbery Partners With Nashville-Based ABLE
Next Brett Eldredge Announces Headlining “The Long Way Tour”