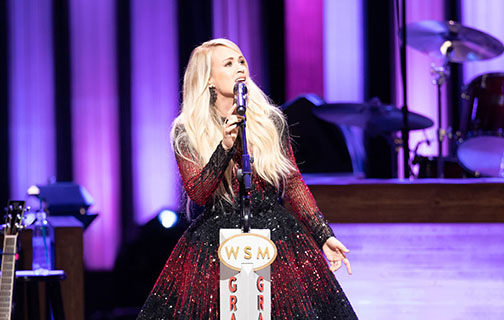 Grand Ole Opry members Carrie Underwood, Chris Janson and Travis Tritt are helping the Grand Ole Opry kick off its CMA Fest week with two shows on Tuesday, June 4 at 7 and 9:30 p.m. As has become a popular Opry tradition, a free Opry Plaza Party will begin earlier in the afternoon with music and activities.

Other Opry performances scheduled for CMA Fest Week include shows on Thurs., June 6, Fri., June 7, and Sat., June 8, as well as a Saturday matinee performance of Opry Country Classics featuring Larry Gatlin & the Gatlin Brothers, Charley Pride, and more at the Ryman Auditorium. More details and artists scheduled will be updated in the weeks prior to Music Fest.

Music editor for Nashville.com. Jerry Holthouse is a content writer, songwriter and a graphic designer. He owns and runs Holthouse Creative, a full service creative agency. He is an avid outdoorsman and a lover of everything music. You can contact him at JerryHolthouse@Nashville.com
Previous Stars Mourn The Death Of Earl Thomas Conley
Next Rodney Crowell Features Some Big Names On His New Album “Texas”