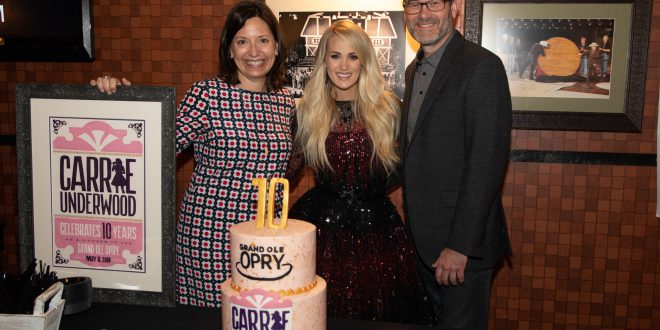 In March 2008, Underwood was surprised with her membership invitation by Opry member Randy Travis after she performed her #1 hit “I Told You So,” a song written and originally recorded by Travis. After hugging a shocked and emotional Underwood, Travis said, “That’s a better performance than I will ever do of that song. Thank you. I’m honored.”

Friday, after again performing “I Told You So”, Underwood was surprised when Travis made another appearance to congratulate her on 10 years of Opry membership. Underwood said, “Ten years have flown by. I knew from the moment God blessed me and let me sing country music that I wanted to be a part of this place. Thank you for being here.”

Underwood, whose new album Cry Pretty will be released by Capitol Records Nashville on September 14, is also scheduled to play two shows at the Opry on June 5 as part of the Opry’s kick off to CMA Music Festival. Opry members Terri Clark and Chris Janson plus newcomer Ashley McBryde are also scheduled to perform. Music begins earlier that afternoon with a free Opry Plaza Party (at 5 p.m.) featuring Warner Bros. recording artist McBryde. Tickets are available at (toll free) 844-425-0513  or online  HERE…

Music editor for Nashville.com. Jerry Holthouse is a content writer, songwriter and a graphic designer. He owns and runs Holthouse Creative, a full service creative agency. He is an avid outdoorsman and a lover of everything music. You can contact him at JerryHolthouse@Nashville.com
Previous Sneak Peek Into Mason Ramsey’s Quick Rise To Fame
Next Lamar Alexander Visit’s Ray Stevens’ “CabaRay”