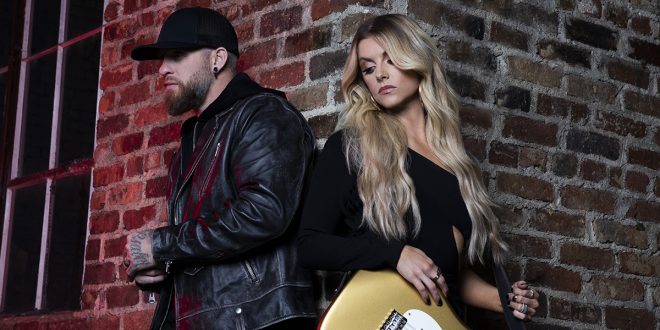 Brantley Gilbert’s unflinching take on real world country has seen the South Georgia native build a back-to-back platinum fan-base with an unflinching consideration of life on life’s terms. With six No. 1’s and an unrelenting live show that coalesced the BG Nation, he’s very committed to maintaining a high level of truth, passion and intensity to his music.
And it would take a woman of equal passion and intensity to go toe-to-toe with Gilbert in the studio. Enter Lindsay Ell, the vocalist and multi-instrumentalist whose fearless approach to rocking country, for a very special duet that captures the fury of love where you find it, its inescapability and the reality of living with memories or fixing what happened.
With an echoing chorus of “What happens in a small town/ Stays in a small town/ Every back road we’ve ever gone down/ Friday night bleachers, Sunday pews/ Ain’t a county line mile without a memory of you…” unfurls into the wreckage and reclamation of love that refuses to die. Written by Gilbert, Brock Berryhill, Josh Dunne and Rhett Akins, “What Happens In A Small Town” (The Valory Music Co.) was produced by noted hard rock guitarist, three-time CMA Musician of the Year and two-time ACM Producer of the Year Dann Huff (Keith Urban, Megadeth, Midland, Kane Brown).
“This song builds and burns,” Gilbert says. “It really has that want for someone you can’t have, and having to live in all the places they are. I wanted to have someone on the record who could match those feelings, to really push the song. It’s not just any female  who makes sense, and we knew that. But Lindsay is a whole other kind of artist, and she understands that power.”
Ell also brought her guitar into the studio. Not only did Gilbert want the vocal fervor, he wanted her to play the guitars on the track.
“Lindsay plays with the same emotion that she sings with,” Gilbert offers. “Her voice is as intense on that guitar as it is when it comes out of her mouth. It’s awesome, and it’s something Dann and I both knew we wanted.”
“It was great that they wanted me to play,” Ell says. “To be part of a song like this is great, but to be asked to play on someone’s song who I respect so much takes it up another level. Obviously playing in front of Dann Huff is something else, but he knew how to really push me – and get a vocal that contains everything situations like this one are made of.”
Gilbert, who’s always contended “every album is a chapter of my life,” certainly resembles “What Happens In A Small Town.” The insurgent mainstream star certainly lost, was haunted by and eventually reunited with that one girl he could never outrun. Today, he and his wife Amber live in the same small town with a song.
“Songs that come from your life just have another kind of power,” Gilbert begins. “People can hear the difference, and they know. For this song, obviously I’m not the only guy – or girl – who’s been there, but I’m lucky/blessed enough to have been able to put it back together.”
“Music, especially music that rocks this hard, crashes through pride, ego and whatever else is in the way,” Ell continues. “Being able to play on this opened up the feelings to me. When I went in to do the vocal, it was all about really channeling that pain.”
Finding the truth in the pain is everything. For Gilbert and Ell, it sets the stage for so much music to come. And on Dec. 14, the song arrives at country radio – ready for the world to consume.
“What Happens In A Small Town” Arrives at Country Radio for January 14

Music editor for Nashville.com. Jerry Holthouse is a content writer, songwriter and a graphic designer. He owns and runs Holthouse Creative, a full service creative agency. He is an avid outdoorsman and a lover of everything music. You can contact him at JerryHolthouse@Nashville.com
Previous Toby Keith Releases “Don’t Let The Old Man In,” Inspired By Clint Eastwood
Next “CMA Country Christmas” Airs Tonight 7:00 PM/CT