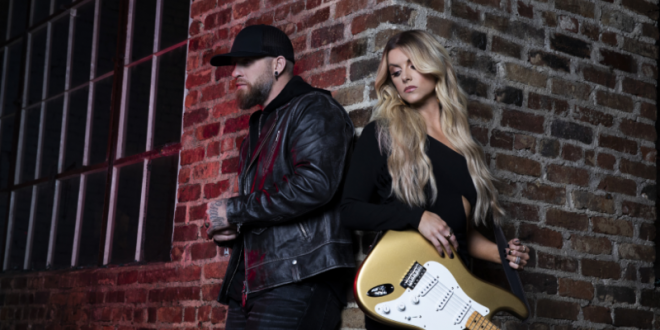 Having taken the unconventional route of making his new music available to fans first with the wide release on December 14, Brantley Gilbert’s video for “What Happens In A Small Town” premiered yesterday. The track lands at Country radio this week, the powerful duet – featuring not just vocals but blazing guitar work from Lindsay Ell went to No.1 at iTunes over the holidays.

Now the Shaun Silva-directed clip, which traces the torment of the memories you can’t unrun when you break up in a small town, arrives with special CMT consideration at the same time. In classic Silva-style, the CMA Awards Music Video of the Year winner sought to capture the reality of the situation and scouted several small towns to find one that had an authenticity to match Gilbert’s lyrics and the pair’s wide-open performance.

“Every word of this is true,” Gilbert says with a laugh. “You know, it’s not the big things that really get you when you break up with someone you love in a place like this: it’s the small stuff. That’s what tears into you.”

Gilbert knows by heart. Moving back to South Georgia after deciding he would always be a man whose heart is where he was raised, he plugged back into his roots – and found himself wondering about the girl he’d written all those songs about. Life, though, has a way of being good to the good-hearted. Though a circuitous route to get there, today that woman is his wife.

“It happened to me,” Gilbert admits. “But it happens to a lot of people out there. Whether you’ve found your way back to them, or not, those feelings don’t always stop just because you’ve broken up. ‘What Happens In A Small Town’ is as much about the memories as it is the fact you’re going to keep running into each other. So, maybe this song will help some people save time!”

Teaming with Lindsay Ell, whose musicianship and intensity equals Gilbert, their passion for the music defines in their performance in the clip. Add the young couple – shown in the moment and in flashbacks to all the moments that relationships are built from – and ” What Happens In A Small Town” offers a core sample of why love right where you are with someone who knows everything about where you come from are the ones that define us.

Music editor for Nashville.com. Jerry Holthouse is a content writer, songwriter and a graphic designer. He owns and runs Holthouse Creative, a full service creative agency. He is an avid outdoorsman and a lover of everything music. You can contact him at JerryHolthouse@Nashville.com
Previous Morgan Evans Celebrates His First Number One In The U.S.
Next Eddy Arnold’s Legacy Lives On, Through Music, Family and Você