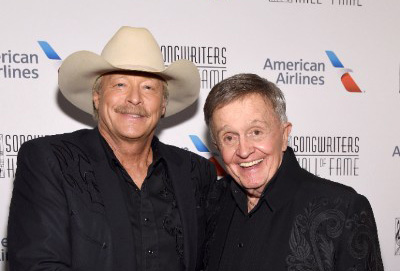 Bill Anderson Inducted Into The Songwriters Hall Of Fame

The Songwriters Hall of Fame inducted country music titan Bill Andersoninto its 2018 Hall of Fame class along with Alan Jackson, Robert “Kool” Bell, John Mellencamp and many others during a ceremony Thursday night in New York.

Steve Wariner enchanted the audience with his soothing rendition of “The Tips Of My Fingers” before inducting Anderson, who delivered a heartfelt and comical speech prior to performing “Still.”

To be considered for induction, nominees must have been published songwriters for a minimum of 20 years with a notable catalog of hit songs.

Anderson is the only songwriter in history to have written charted songs in every decade since the 1950s. The legendary Grand Ole Opry headliner is among the few country songwriters to cross over to the pop charts in the 1960s with such hits as “Still,” “8 X 10,” “The Tip of My Fingers” and “Mama Sang a Song.”

His first No. 1 (of 14) was “City Lights” recorded by Ray Price in 1958, when Anderson was just 19, and he soon had hits with the likes of Connie Smith, Hank Locklin, Porter Wagoner, Jim Reeves, Faron Young, Roger Miller and Kitty Wells.

Anderson continued to top the country charts in the ’60s and ’70s with classic songs like “I Get the Fever,” “My Life” and “Sometimes.”

In the ’90s and 2000s, Anderson penned and co-wrote hits for and with Steve Wariner, Kenny Chesney, Vince Gill, George Strait and Brad Paisley, whose Anderson-penned “Whiskey Lullaby” won the 2005 Country Music Association Song of the Year award.

The prolific songwriter released his first official autobiography in 2016. “Whisperin’ Bill Anderson: An Unprecedented Life in Country Music” has received praise from fans and critics alike and is now available for download as an audiobook. Forbes deemed the book “One of the Best Autobiographies” of the past year. Anderson continues to tour and perform regularly at The Grand Ole Opry, which he has been a member of for an impressive 56 years. Most recently Anderson is featured on Brad Paisley’s new project with their song “Dying to See Her Again.” The emotional song was written by both Paisley and Anderson and is on Paisley’s album Love and War released earlier this year.

Music editor for Nashville.com. Jerry Holthouse is a content writer, songwriter and a graphic designer. He owns and runs Holthouse Creative, a full service creative agency. He is an avid outdoorsman and a lover of everything music. You can contact him at JerryHolthouse@Nashville.com
Previous Dierks Bentley Hits The Top of the Mountain
Next David Lee Murphy Gets His First #1 In 23 Years