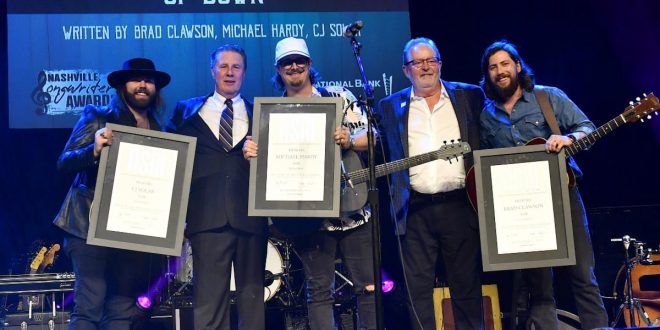 Just days after CJ Solar’s dream of performing on the Grand Ole Opry came true, he celebrated one of his biggest weeks as a songwriter. Jason Aldean just dropped the CJ co-written “I Don’t Drink Anymore.” CJ won a “10 Songs I Wish I’d Written” trophy for “Up Down” at Tuesday’s star-studded Nashville Songwriter Awards. He was joined by his co-writers Brad Clawson and Hardy and sang the song in front of George Strait, Reba McEntire, Loretta Lynn and a host of other stars and dignitaries at the historic Ryman Auditorium – his first time to perform on the hallowed stage.
CJ’s own single, “Coming My Way,” which he wrote with Jake Mitchell and Hardy, is set to impact Country radio September 30, 2019 and is the title track to his upcoming third EP. Listen to the new single on Apple Music , Spotify , YouTube and Amazon now.
CJ continues his stint opening for Gary Allen this weekend with dates in Augusta GA, Glen Allen VA and Jim Thorpe PA.

Music editor for Nashville.com. Jerry Holthouse is a content writer, songwriter and a graphic designer. He owns and runs Holthouse Creative, a full service creative agency. He is an avid outdoorsman and a lover of everything music. You can contact him at JerryHolthouse@Nashville.com
Previous Lauren Akins Releases Her First book
Next Miranda Lambert Announces “The Wildcard Tour”