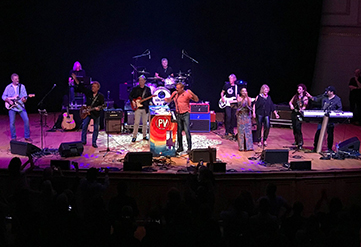 It could only be called an epic night of music for one of the noblest reasons. Country music icons BlackHawk, Brooks & Dunn’s Kix Brooks, Diamond Rio, Foster & Lloyd, Alan Jackson, Brad Paisley, Lee Roy Parnell, Pam Tillis, Phil Vassar and Steve Wariner, all backed by the band Sixwire, met up for a one-night-only event, donating their time, to raise money for the family of one of their former champions—Arista/Nashville and Seagayle Music’s Mike Owens. The organizers of the event, friends and family of Mike Owens wish to extend a heartfelt thanks to everyone who participated in making the concert a success bringing in more than $100,000.00 for the Mike Owens Family Trust.

Emceed by Arista/Nashville’s original label president, Tim DuBois, the event offered country music fans live performances of some of their favorite classic country hits from Diamond Rio’s “Meet In the Middle,” to Phil Vassar’s “Just Another Day in Paradise,” to an all-star collaboration of Merle Haggard’s “Working Man Blues.” Several of the artists also played songs specifically for Owen’s family, including Alan’s “Song for the Life” and Wariner’s “Sails.”

But in addition to the music, the audience was given insight into the Arista/Nashville label family and the man they had come together to honor. During their sets, each act remembered him and commented on how Owens touched their lives and helped shape their careers.

Afterward, DuBois said, “It was an incredible night of talent supported by a loving record label family. Mike was celebrated and remembered in the best way we knew how—with the music he loved and believed in.” The last words spoken during the evening came from Owen’s wife who expressed her deepest appreciation to everyone in the room.

The September 25th show at War Memorial Auditorium was created to raise funds to help defray the costs of the medical treatments incurred while Mike, who had been diagnosed with renal disease, was awaiting a kidney transplant. Sadly, his fight ended when he passed away on September 2.  Donations are still being accepted for The Mike Owens Family Trust through his Go Fund Me page HERE.

Music editor for Nashville.com. Jerry Holthouse is a content writer, songwriter and a graphic designer. He owns and runs Holthouse Creative, a full service creative agency. He is an avid outdoorsman and a lover of everything music. You can contact him at JerryHolthouse@Nashville.com
Previous Kid Rock’s 4th Annual Fish Fry Set for Oct. 5th & 6th
Next John Scott Sherrill Takes Up Residence At Famous Music Row Bar