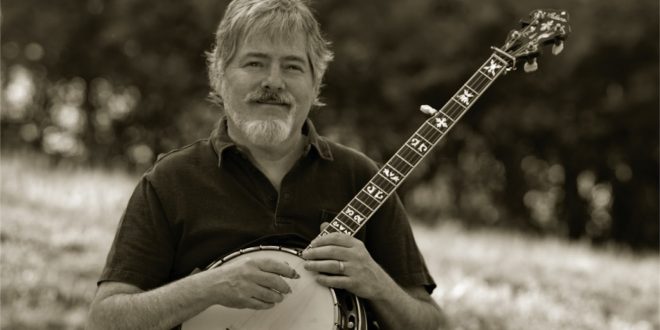 My Bluegrass Heart, Béla Fleck’s first bluegrass album in over 20 years, has debuted at #1 on the Bluegrass Album Chart and #3 on the American / Folk Album Chart. Give it a listen here, and watch a live performance of “Round Rock,” featuring Michael Cleveland, Sierra Hull, Justin Moses, Mark Schatz and Bryan Sutton.

“They nearly always come back,” says Béla. “All the people that leave bluegrass. I had a strong feeling that I’d be coming back as well.”

My Bluegrass Heart is that return the 15-time Grammy winner is talking about – the third chapter in a decades-spanning trilogy that began with 1988’s Drive and continued in 1999 with The Bluegrass Sessions. Produced and written by Fleck, My Bluegrass Heart continues the tradition of sharing music between generations. On his collaboration with Billy Strings and Chris Thile, The New York Times writes, “Charm School” is by no means a traditional bluegrass tune; it’s a speedy, ever-changing suite, vaulting through keys, meters and tempos.”

“In my opinion, Béla Fleck is one of the most important musicians of all time,” adds Billy Strings. “He bridges the gap between bluegrass, classical, jazz, world music, and everything in between. It seems like there’s no limit to what he can achieve on the banjo.”

Béla will be touring My Bluegrass Heart throughout 2021, including a sold out night at the Ryman Auditorium in Nashville on January 7, 2022 with Sam Bush, Michael Cleveland, Jerry Douglas, Stuart Duncan, Sierra Hull, Edgar Meyer, Justin Moses, Mark Schatz, Billy Strings, Bryan Sutton, Chris Thile, Molly Tuttle and more to be announced. Tour dates are below, and ticket information can be found at belafleck.com.

When the endlessly curious Fleck prepared to make The Bluegrass Sessions, he contemplated some other musical wanderers: “It was ten years after the Drive album, and I had been doing the Flecktones for all that time; I was coming back thinking hmm…what have I learned that I can bring back to bluegrass?” he said. “It resonated with me how Coltrane and Charlie Parker, after studying a lot of music from outside of the jazz world, brought some truly great things back to it from the outside.”

More than anything, it was this group of musicians that drew Fleck home to bluegrass. His core group of bluegrass comrades, including mandolinist and fellow New Grass Revivalist Sam Bush, guitarist Tony Rice, fiddle player Stuart Duncan, bassist Mark Schatz and dobro player Jerry Douglas, appear on Drive, Bluegrass Sessions, and all except for the late Tony Rice are featured on My Bluegrass Heart. The album is dedicated to Tony and Chick Corea, whose classic My Spanish Heart inspired the title. Corea knew about the title. “He laughed and said ‘Yeah, man. Go for it!” said Fleck.

“This is not a straight bluegrass album, but it’s written for a bluegrass band,” Fleck explained. “I like taking that instrumentation, and seeing what I can do with it – how I can stretch it, what I can take from what I’ve learned from other kinds of music, and what can apply for this combination of musicians, the very particularly ‘bluegrass’ idea of how music works, and what can be accomplished that might be unexpected, but still has deep connections to the origins.”

“My dirty little secret,” Béla laughs, “Is that I don’t play that differently from genre to genre. It’s about the musicians I surround myself with. Bluegrass though – it’s central to everything I do.”

Music editor for Nashville.com. Jerry Holthouse is a content writer, songwriter and a graphic designer. He owns and runs Holthouse Creative, a full service creative agency. He is an avid outdoorsman and a lover of everything music. You can contact him at JerryHolthouse@Nashville.com
Previous Brantley Gilbert Just Keeps Giving Back
Next Lainey Wilson Goes Straight To The Top