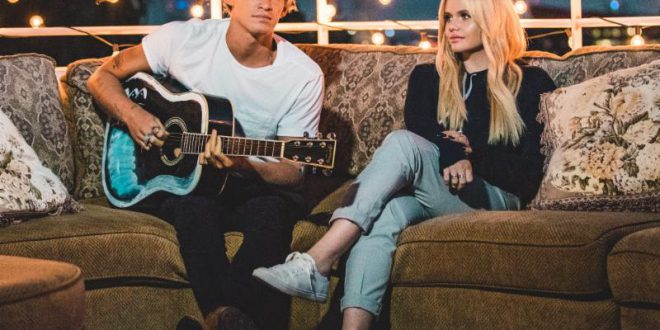 NEW SONGS “MATERIAL BOY” AND
“I WON’T REMEMBER YOU TOMORROW”
NOW AVAILABLE
ALLI FEATURED ON SONY MUSIC AUSTRALIA’S CHARITY SINGLE ALONG WITH OLIVIA NEWTON JOHN AND MORE
“It’s been two years since Alli has released new music, and it’s an epic comeback.” – Marie Claire
“Now that we can finally hear the fruits of her songwriting, it might be time to notice her.”
–Billboard
“[Simpson] has come a long way…taking control of her sound and image.” – Idolator

LA based singer Alli Simpson releases a stripped down acoustic video for her new original song “I Won’t Remember You Tomorrow” today featuring her brother singer-songwriter Cody Simpson on guitar.

The track holds significant personal meaning to Alli, as she explains, “The experiences explained in this song are based on recent true events in my life. So I wanted to be able to share that with my audience & have them connect with me in ways the people close to me in my life can. I hope people can relate to it in any circumstance. Know your worth!”
Recently, Alli premiered another original song titled “Material Boy,” on Billboard. Both “Material Boy” and “I Won’t Remember You Tomorrow” are now available everywhere. PRESS HERE to purchase and see below to stream.

Alli also teamed up with fellow artists (including Olivia Newton John, Delta Goodrem, Justice Crew, Jessica Mauboy, Samantha Jade, and more) to records a special version of the Beatles’ classic “With a Little Help from My Friends” for Sony Music Australia’s charity single. All of the proceeds received by Sony Music from the sale of this charity single will be donated to the Sony Foundation to support Australia’s disadvantaged youth. PRESS HERE for more info.

While currently in Australia, Alli is co-hosting along with Jai Waetford a new online reality series The ShareSpace, an online music competition on YouTube. Over the course of 30 days, “The Talent” (music-making creative) will be presented with various challenges, collaborative opportunities and industry development support designed to enhance their careers and fan-base throughout and beyond their time in The ShareSpace. PRESS HERE for more info.

In addition to her roles as a singer and co-host, Alli is involved in many different facets of entertainment. Alli is currently featured in the Aldo Shoes Fall Campaign in 35+ countries, PRESS HERE, and recently was the backstage correspondent at the iHeart Music Festival in Vegas. She also continues to serve as Teen Ambassador for the Children’s Miracle Network Hospitals and represented Team Australia in the torch relay at the 2016 Olympics in Rio.