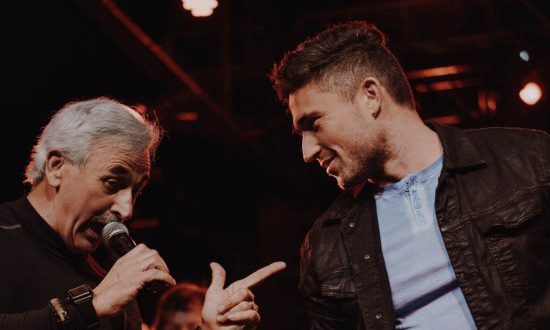 Michael Ray, one of the night’s featured talents, welcomed surprise guest Aaron Tippin to the stage where the two performed the country legend’s #1 hit song, “Kiss This,” before a SOLD-OUT crowd.

“I grew up on 70’s, 80’s, and 90’s country, and about the time I was playing solo gigs around my home state of Florida, I was booked by a local club to open for Aaron,” shares Ray. “It was one of those early shows I’ll never forget as it helped pave my way to Music City. So, to have him return the favor and surprise the crowd by joining me on stage last night was such a great moment!”

“Man, what a great night catching up with old pals from the early days and meeting some new talented singers,” adds Tippin. “I appreciate Michael Ray inviting me out to sing one of my hits with him. He’s a great guy and a huge talent. I’m ready to do it again!”

Music editor for Nashville.com. Jerry Holthouse is a content writer, songwriter and a graphic designer. He owns and runs Holthouse Creative, a full service creative agency. He is an avid outdoorsman and a lover of everything music. You can contact him at JerryHolthouse@Nashville.com
Previous Moon River Music Festival Moves To Chattanooga
Next Trace Adkins, Craig Morgan & Blake Shelton Team Up For Mental Health