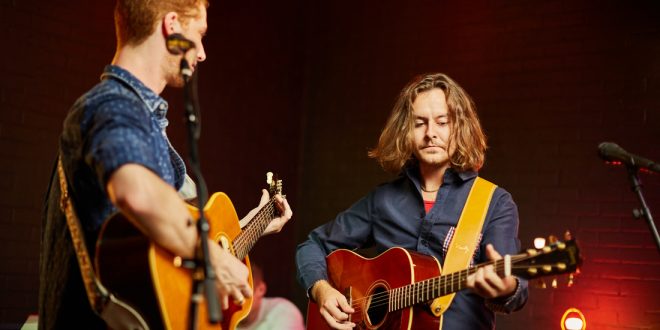 The newest addition to the LR Baggs 2019 Americanafest Sessions is Alabama-native and classic country crooner, Dee White. Filmed at the LR Baggs Soundcheck studio in Nashville, TN during Americanafest 2019, White performs “Rose of Alabam”, “ Ol’ Muddy River”, and “In the Garden”.

From White’s debut album, Southern Gentleman, are the jangly “Ol’ Muddy River” and “Rose of Alabam”. The session is rounded out with a cover of “In the Garden”, a hymn written by C. Austin Miles and made famous by Elvis in his gospel album, How Great Thou Art.

Backing White in the session are Benjo Markus (acoustic guitar, vocals), Jackson Miller (keys), David Ferguson (bass), and Mike McLaughlin (drums). White is featured using the LR Baggs Element Active and running through the Venue DI, while Markus is using the M1 Active and running through a Venue DI. The videos were directed and edited by Mike Luckett, with camera work by Dave Johnson, and audio mixing by David Brubaker.

“On Southern Gentleman, White’s Roy Orbison-esque vocals spin into jangly country instrumentation, complete with steel guitar swells and grooving fiddle that complement the rise and fall of his silky smooth voice,” writes The Boot. “It’s not weighed down by production, making it an evergreen record that’s just as based in modernity as it is in the classic country music by which White is inspired. He’s got the sensibilities for compelling songwriting and a diligent approach that’s revealed throughout the course of the album, which sets him apart from his peers.”

Music editor for Nashville.com. Jerry Holthouse is a content writer, songwriter and a graphic designer. He owns and runs Holthouse Creative, a full service creative agency. He is an avid outdoorsman and a lover of everything music. You can contact him at JerryHolthouse@Nashville.com
Previous Cristina Cash To Make Her Opry Debut
Next The Black Crowes Are Coming To Ascend Amphitheater