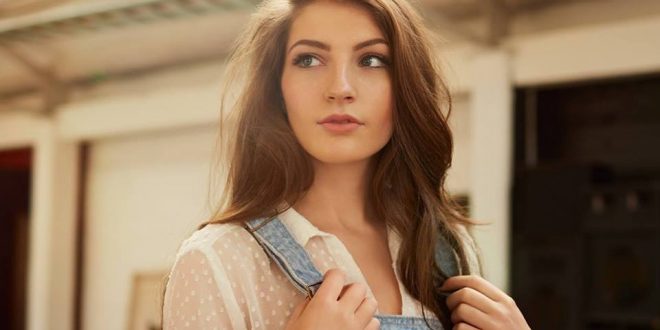 Good afternoon Catherine! What’s a typical day like for you (food-wise) when you’re at home and how is that different from when you are on tour?

Hey! Thanks for having me. When I’m at home it’s awesome because mum and dad cook. My favourite food is dad’s pasta and sauce that he makes. My typical food day at home consists of something cooked by mum and dad for dinner (or my favourite chinese) and lots of chocolate.

When I’m away from home it always involves takeout food, so I usually get pizza or something handy, and also lots of chocolate.

You are quite the world traveler, tell us about one memorable meal you’ve had during your travels.

I had an amazing burger with bacon, lettuce, tomato and onions in a place called ACME in Nashville, so probably that.

What is the one place you have always dreamed of dining?

I’d always wanted to go to Pancake Pantry in Nashville. I finally got to try it for the first time and it was awesome. I thought the butter on it was a lump of cream, so I ate it all at once and was unpleasantly surprised by that…

If it was the only thing I could have it’d be dad’s pasta. If it was something I had to have along with everything else it’d be chocolate because I eat that every day anyway!

Do you like to cook and if so what’s your signature dish?

I don’t cook if I can help it. I made nice roast potatoes once, but I’m definitely not good at making food.

Here at BB we are big fans of listening to “Starting From Now” on Apple Music “Breaking Country” playlist. What’s it like being a featured artist? What makes this song so special to you?

Thanks! It’s so cool to see myself up there with so many talented people. This song is about a relationship that ends but isn’t really over, and you tell yourself you’re done letting someone back in but you never really are. I went through that for a long time so this song means alot to me because of that.

Any exciting summer plans fans can look forward to?

Yes! Lots of festival performances coming up, so that’s exciting!

Taylor Swift or Jusy Garland, I love them both. I’d have pasta carbonara cause it’s fabulous!

Proving not all country artists come from America, Catherine McGrath is an Irish singer and songwriter whose music blends fresh-faced pop music with influences straight from Nashville. Born in County Down in Northern Ireland in 1998, McGrath learned guitar from her grandmother, who taught her to play and sing “The Lion Sleeps Tonight.” McGrath’s parents also sang and played, and were frequent performers at the annual Fiddlers Green Music Festival. McGrath honed her skills by seeing her parents on-stage and by watching instructional videos online. McGrath took up songwriting, and in addition to performing her own material, she began making homemade videos of herself performing current pop hits, which she posted online. McGrath’s style was informed by contemporary pop as well as the updated country sounds of artists such as Taylor Swift, Kacey Musgraves, and Maddie & Tae. McGrath’s videos attracted the attention of Instrumental, a company that finds talent online and grooms them for larger success; McGrath moved to London to work with the firm, and after only a few months, she began traveling to Nashville for periodic songwriting and recording sessions. In the summer of 2016, McGrath, then only 19, landed a recording contract with Warner Bros. Records, and December 2016 saw the release of her debut EP, a four-song release titled One.