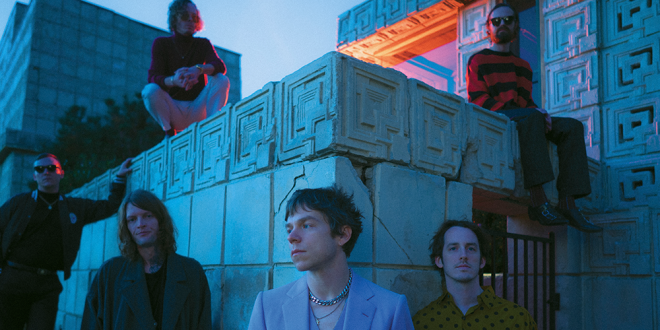 Today, Cage The Elephant debuted their music video for “Black Madonna,” the most recent single off their album Social Cues. The video, directed by lead singer Matt Shultz, and edited by Michael Rees entirely over Zoom, is made up of a collage of new footage made under quarantine, live and behind-the-scenes video from the band, and repurposed existing never-before-seen film recordings. It also incorporates footage from 15 collaborators collected over the past eight weeks, including contributions from the award-winning Guggenheim fellow and Academy Award-nominee, Kasumi. Flaunt says the video is a “beautiful hodgepodge of imagery, one that somehow feels both retro and timely. With swooping visuals and digital effects abound, Rees strung together a film that dances along to Cage The Elephant’s delightful beat.”

“Black Madonna” the song is Cage The Elephants 5th single to go #1 at AAA Mediabase, 6th Single to go #1 at AAA Billboard/BDS, and the 3rd single off Social Cues to go Top 5 and Top 3 at Alternative. Cage the Elephant is the first band in over a decade to score three #1 singles on the Billboard Adult Alternative Songs airplay chart from the same album. Read the chart story HERE. Additionally, the song is the band’s 12th top 10 on Billboard’s all-rock-format Rock Airplay chart.

Music editor for Nashville.com. Jerry Holthouse is a content writer, songwriter and a graphic designer. He owns and runs Holthouse Creative, a full service creative agency. He is an avid outdoorsman and a lover of everything music. You can contact him at JerryHolthouse@Nashville.com
Previous LISTEN: Chord Overstreet Releases “What You Need”
Next Stars Remember Rock ‘N’ Roll Icon Little Richard