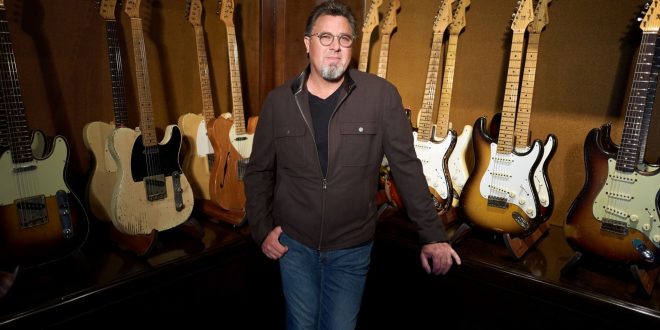 Grammy Award-winning MCA Nashville country artist Vince Gill released the third focus track from his upcoming album Okie today. The song, “I Don’t Wanna Ride The Rails No More,” is the first track on the album, and it is clearly inflected with the Okie experience. The album’s title is taken from the once-derogatory term used to disparage migrants from Oklahoma, many of whom hopped trains to make it to the west coast during the Dust Bowl and Great Depression eras. Okie releases August 23.

“The whole image of riding a train has such great beauty to it,” says Gill, who wrote the song. “It conjures images of The Grapes of Wrath, the Dust Bowl, and people hopping freight trains.” Gill continues, “This song has got to come from my experience in order to be able to put it on paper and to have it feel legit and truthful and honest. In my case it could very well be about a bus instead of a train—I’ve been riding a tour bus for 40 something years now. This is a song of reflection, yearning and hopefulness.”

With 21 Grammy Awards to his name, Gill has solidified his place as country music’s most eloquent and impassioned champion. He is both a world-class musician and a wide-ranging songwriter whose compositions earned him entry into the Nashville Songwriters Hall of Fame in 2005 and the Country Music Hall of Fame in 2007.

In 2017, Gill was invited to join the Eagles for their worldwide tour, and he just returned from the month-long European leg of their latest tour with stops in the U.K., Belgium, Germany, and the Netherlands. Gill is set to perform at Bluegrass Nights at the Ryman on July 25.

Music editor for Nashville.com. Jerry Holthouse is a content writer, songwriter and a graphic designer. He owns and runs Holthouse Creative, a full service creative agency. He is an avid outdoorsman and a lover of everything music. You can contact him at JerryHolthouse@Nashville.com
Previous Listen: Bluegrass Phenom Billy Strings Shares First Song From New Album
Next Kenny Chesney Publishing 456-Page Coffee Table Book For No Shoes Nation