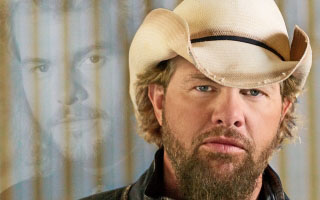 A year ago, Toby Keith closed 2018 and its celebration of the 25th anniversary of his seminal, acclaimed and multi-platinum debut album Should’ve Been A Cowboy. That album set him on a creative and commercial path that allowed for one of the most remarkable acquisitions of artistic control in the history of recorded music. Marking that transformation is the story of his 2019, as encapsulated in the release of Toby Keith Greatest Hits: The Show Dog Years.
The collection spanned the establishment of Keith’s own Show Dog Nashville record label and marked his assumption of full creative control. At the same time, new songs pointed toward limitless possibility. Debut single “That’s Country Bro” earned widespread airplay and coverage and reminded fans and music lovers of Keith’s inimitable way with a clever lyric.
On the other end of the spectrum, the album also included Keith’s solo-penned “Don’t Let The Old Man In.” So moved was Clint Eastwood by the song Keith wrote for him as a thank-you, it became an immediate addition to the soundtrack of Eastwood’s fall 2018 film release The Mule. Close observers of Keith’s career have suggested that “Don’t Let The Old Man In” may be the highpoint of his storied songwriting career, and it comes years after his 2015 induction into the Songwriters Hall of Fame. What that level of growth and development as a creator might mean for Toby Keith’s 2020 is, well, anyone’s guess.
Meanwhile, 2019 also saw Keith’s catalog surpass 10 billion streams, while as a songwriter his BMI performances on commercial radio stations worldwide crossed the 95 million threshold, keeping his place as BMI’s top country songwriter in terrestrial radio airplay.

Music editor for Nashville.com. Jerry Holthouse is a content writer, songwriter and a graphic designer. He owns and runs Holthouse Creative, a full service creative agency. He is an avid outdoorsman and a lover of everything music. You can contact him at JerryHolthouse@Nashville.com
Previous Hayes Carll And The Lumineers At The Top Of Americana’s Top 100
Next Dustin Lynch Gives Back For Christmas