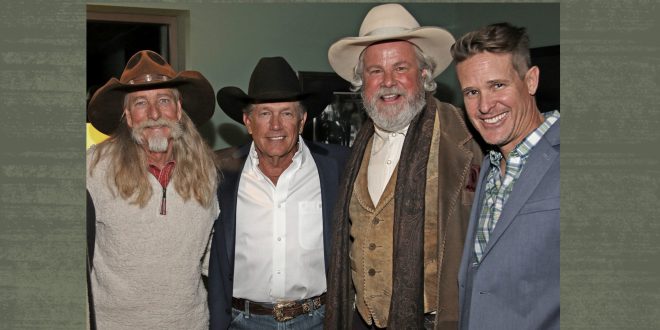 A host of industry insiders and country music stars including Brandy Clark, Chris Stapleton, George Strait, Kenny Chesney, Lee Ann Womack, Mac Davis, Mo Pitney, Robert Earl Keen, Rory Feek and others, filled the Franklin Theatre Tuesday night for the premiere of “Tennessee Whiskey –  The Dean Dillon Story.”  The new film directed by Cole Claassen is about the life of prolific country music songwriter Dean Dillon.
The evening, hosted by Claassen, BMI and Sony ATV, began with a VIP cocktail reception followed by a short welcome from the man of the hour, Dillon, and director Claassen, who introduced the film. The intricate documentary took viewers on a journey through the life of a songwriting genius, showing his quick witted sense of humor and big heart, but most of all his integrity, both creatively and personally.
Claassen met Dillon while skiing in Colorado and was captivated by his story and asked him if he would be willing to do a film project with him. Even though Dean had been approached many times in the past about a project like this, the songsmith says that something just felt right about the idea this time, and the rest is history.
BMI Icon songwriter Dillon has written more than 26 #1 songs, with the majority of those recorded by his longtime friend and “king of country,” the great George Strait.  Dillon has also written more than 53 Top 10 songs in his storied career thus far.
The new film is available on iTunes HERE.