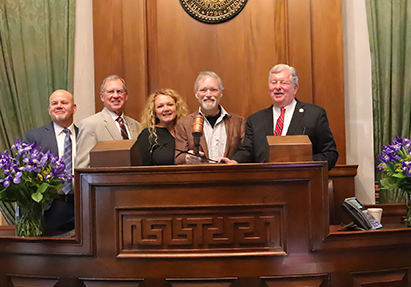 John Berry, was recognized on August 23, 2019 by the Senate of the 111th General Assembly of the State of Tennessee, Senate Speaker and Lt. Governor Randy McNally presiding. Following the recognition on the Senate floor, Berry was formally presented with a Senate Joint Resolution to honor and commend him for his philanthropic efforts by Sumner County Senator and Speaker Pro Tempore Ferrell Haile. The “Minister of the Day” was Tim LaFleur, Berry’s Pastor and spiritual mentor led the session with an invocation.

“Whereas, it is fitting that the members of this General Assembly should salute those citizens who, through their extraordinary efforts, have distinguished themselves as community leaders of whom we can all be proud. Be it resolved by the Senate of the One Hundred Eleventh General Assembly of the State of Tennessee, The House of Representatives concurring, that we honor and commend John Edward Berry for his philanthropic efforts.”

“How honored I feel to have been recognized by the State Senate of TN and appreciate Senator Haile for bringing forth this resolution,” said John Berry. “Robin and I have been residents of Gallatin, TN in Sumner County for five years. We have met some incredible people here and I can honestly say it’s a great place to call home.”

The Grammy winner’s current single, “The Richest Man,” continues to make an emotional impact with fans. Catch John Berry on tour as he wraps up his 2019 tour and prepares for his 23rd Annual John Berry Songs and Stories Christmas Tour.

Music editor for Nashville.com. Jerry Holthouse is a content writer, songwriter and a graphic designer. He owns and runs Holthouse Creative, a full service creative agency. He is an avid outdoorsman and a lover of everything music. You can contact him at JerryHolthouse@Nashville.com
Previous Cody Jinks Set to Make Opry Debut on August 28
Next 53rd Annual CMA Award Nominations Announced