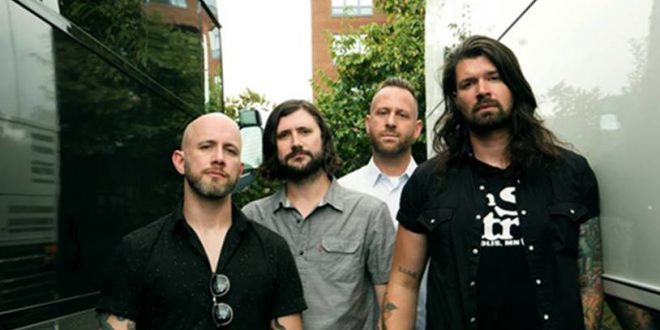 Taking Back Sunday is bringing their 20th anniversary tour to Marathon Music Works on Wednesday & Thursday, October 16-17. The show is part of their year-long anniversary celebration that has the internationally celebrated mainstream rock band touring the world and includes the release of a 21-song career-spanning compilation (featuring two new songs), titled Twenty, which was released in January.

Coinciding with the second leg of their North American tour is the upcoming remastered vinyl reissue of the band’s 2002 debut, Tell All Your Friends. The LP will be available on October 4th as a wide release, while a special edition—pressed on iridescent color-morphing green vinyl and limited to 1,000 copies—will be for sale exclusively via the band’s website and on tour. Click here for more info on the reissue.

From the band’s landmark 2002 debut Tell All Your Friends to their most recent full-length, 2016’s Tidal Wave, Taking Back Sunday – vocalist Adam Lazzara, guitarist John Nolan, drummer Mark O’Connell and bassist Shaun Cooper – have evolved from a key player in the early 2000s emo scene to a genre-defying rock band who have earned three gold albums, four Top 10 albums, ten Top 10 singles on the Billboard charts, and who just recently became the youngest inductees into the Long Island Music Hall of Fame.

Taking Back Sunday will be at Marathon Music Works on Wednesday & Thursday, October 16-17

Music editor for Nashville.com. Jerry Holthouse is a content writer, songwriter and a graphic designer. He owns and runs Holthouse Creative, a full service creative agency. He is an avid outdoorsman and a lover of everything music. You can contact him at JerryHolthouse@Nashville.com
Previous Ashley McBryde To Be Awarded CMT’s “Breakout Artist Of The Year”
Next Shenandoah And Brad Paisley Raise $350,000 For Alzheimer’s Association