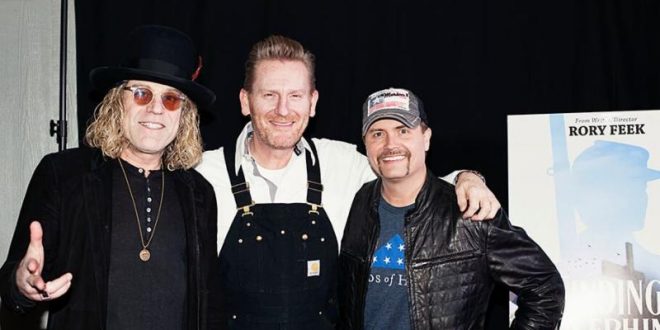 On Sunday, January 27th , about 40 minutes outside of Nashville, the stars were shining in the sky and on the red carpet at Rory Feek’s farm.
In celebration of the release of Finding Josephine – available in Walmart stores on February 5 th – Rory Feek opened up his farm to showcase the film in front of a hometown audience. The story’s roots began, more than 20 years ago, when he purchased a 150-year-old farmhouse and ran across letters between a soldier from the late 1800’s and his wife back home… an event that changed his family’s life and story forever.
Walking the red-carpet Sunday night were Rory Feek, and Big Kenny and John Rich from country duo Big & Rich, along with other cast members and VIP’s.
The night felt magical with special touches like a vintage popcorn stand, boxed candy and The Buffalo Gals playing their traditional music while guests entered the barn that was transformed into a theater, while Civil War reenactors tended a fire and campsite near the farm’s windmill.
Adding to the excitement of the night a Facebook live event was streaming so fans across the country could not only watch the film, but see and participate in the Q&A that Rory did after the screening. The film has deep roots in Feek’s own story. “Being able to share the special evening on Facebook Live was especially exciting. It allowed us to turn our big red barn that seats some… into a massive online barn that seats everyone. And that’s pretty darn amazing,” said Rory, about the event. Due to the success of the live streaming event and the overwhelming response to it, Feek has decided to offer an encore streaming that will take place on his Facebook page https://www.facebook.com/roryfeek/ on Monday, February 4th at 6 PM CST.
In the 1999, he purchased a 150-year-old farmhouse and came across letters between a young Maury County soldier named John Robison in the 1800’s, and his wife Josephine. Incredibly moved by their love story and longing for one of his own, Feek’s wish came to life when he met and married his late wife Joey (with whom he formed the country duo Joey+Rory). In 2011, the pair recorded “Josephine,” a song that was loosely based on the letters and later blossomed into a full-blown screenplay that told both of Feek’s story and that of Josephine, connecting the two tales with a thread of devoted love.
Finding Josephine will be available at Walmart stores across the county beginning February 5th. In addition to the film the DVD also includes 38 minutes of never before seen, behind the scenes content along with a Directors Commentary and deleted scene.
Finding Josephine , a stirring Civil War drama co-written and directed by Grammy Award-winning country music singer/songwriter Rory Feek is set for release at Walmart and stores across the nation on February 5 th . Starring Alice Coulthard (TNT’s The Last Ship), Boris McGiver (NetFlix’s House of Cards, The Wire), Jessejames Locorriere (NetFlix’s Ozark, Marvel’s Ant-Man), Linds Edwards (Walking Dead pilot, Lethal Weapon, Rectify, Homefront), and Matthew Brady, the film is about a young soldier’s wife who dresses as a man and enlists in the Army in a quest to find her missing husband… and the impact their story has on another family 150 years later. Finding Josephine was produced and co-written by Aaron Carnahan.
Finding Josephine was filmed in Halifax County, Virginia, in 2015. The film was screened at the 2016 Bentonville Film Festival, as well as 2016 Nashville Film Festival, where it won the Grand Jury Prize for Tennessee First Feature. The February release marks the first time the film will be made available to a wider audience.

Music editor for Nashville.com. Jerry Holthouse is a content writer, songwriter and a graphic designer. He owns and runs Holthouse Creative, a full service creative agency. He is an avid outdoorsman and a lover of everything music. You can contact him at JerryHolthouse@Nashville.com
Previous Don McLean Reflects On The Tragic Inspiration Behind “American Pie”
Next Craig Wayne Boyd Heading For The Silver Screen