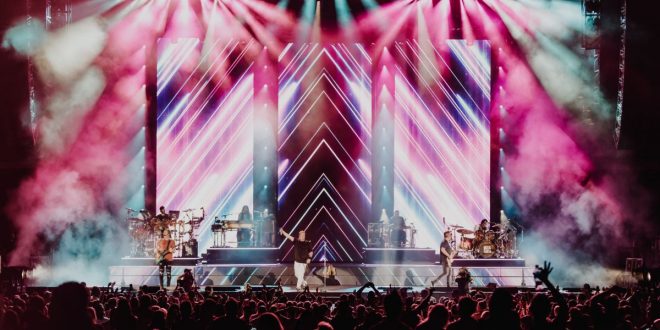 Rascal Flatts’ brought their Summer Playlist tour to a sold-out Nashville audience on Saturday night. With special guests King Calaway and Jimmie Allen kicking off the evening, the trio took to the stage for an unforgettable performance of their hit-filled catalog, as well as recent No. Ones and their current Top 20-and-rising single “Back To Life” (Big Machine Records). The energetic set, had the capacity crowd singing along from start to finish. A portion of ticket sales from the trio’s Nashville show on Saturday will be donated to Monroe Carell Jr. Children’s Hospital at Vanderbilt, as part of the group’s long standing relationship helping raise millions of dollars for the hospital, which renamed its Pediatric Surgery Center to The Rascal Flatts Surgery Center in 2010.

The group recently announced they will continue their headlining tour into the fall, revealing the Summer Playlist tour will stop in Canada for a special run of shows kicking off on Oct. 24 in Medicine Hat, AB. The tour will continue this weekend with upcoming dates set in Reno, NV (7/13), Shakopee, MN (7/18), Minot, ND (7/19) and Cheyenne WV (7/20).

One band. Ten albums. Seventeen No. One hits. Time and success have only put Rascal Flatts closer to their core with expert musicianship, razor-sharp vocals and songs that have shaped lives, loves and the genre of country music. The trio’s Top 20 single “Back To Life” is currently ascending at Country radio and follows back-to-back chart-topping singles “Yours If You Want It” as well as “I Like The Sound Of That” (Big Machine Records). Rascal Flatts recently dropped a four-song EP, JUKEBOX as a surprise for fans, featuring special spins on their most-loved songs. The group has also earned over 40 trophies from the ACA, ACM, AMA, CMA, People’s Choice and more, also making them the most awarded country group of the past decade. The trio is currently on their stacked headlining Summer Playlist tour playing major cities across the U.S.

Music editor for Nashville.com. Jerry Holthouse is a content writer, songwriter and a graphic designer. He owns and runs Holthouse Creative, a full service creative agency. He is an avid outdoorsman and a lover of everything music. You can contact him at JerryHolthouse@Nashville.com
Previous Kenny Chesney Set To Release “Tip of My Tongue”
Next Loretta Lynn Visits Ray Stevens’ CabaRay