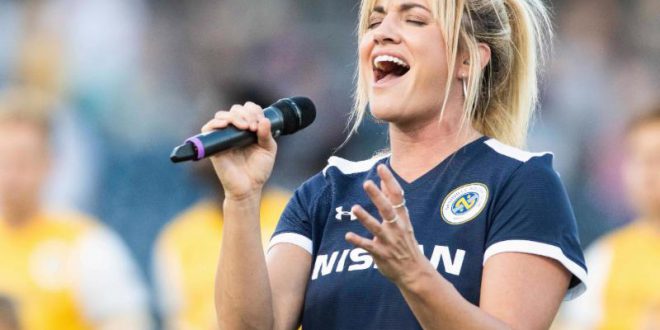 Singer-songwriter  Morgan Myles  has just announced her new Nashville live series “Miss Morgan Myles Live,” which launches with three upcoming shows at SoBro venue Acme, beginning August 18th. “Miss Morgan Myles Live: at Acme” continues into October with performances September 29th and October 13th.
The vocalist was just selected to sing the National Anthem at last week’s Nashville Soccer Club game to a full crowd for a winning game, having recently celebrated the reveal of her official video for “ Acapella ” across CMT platforms, where it debuted at #11 on their 12-Pack Countdown last week. Fans can continue to vote at CMT Music for Myles’ “Acapella” music video  here .
Filmed with renowned director Roman White (Taylor Swift, Kelly Clarkson, Carrie Underwood), the upbeat video was captured across downtown in Nashville earlier this Spring. As the first spotlight track from her forthcoming project, the song showcases Myles’ seamless blend of country, soul and pop.
A song Myles’ describes as an “empowering anthem” she explained to CMT , “Most of my songs are about finding strength in some way. With “Acapella” I was inspired by a past situation where I had to realize that I’m the one in control of my happiness and not to let someone else’s issues bring me down. I hope this song helps other people who need to find the strength to love themselves.”

Music editor for Nashville.com. Jerry Holthouse is a content writer, songwriter and a graphic designer. He owns and runs Holthouse Creative, a full service creative agency. He is an avid outdoorsman and a lover of everything music. You can contact him at JerryHolthouse@Nashville.com
Previous Lorraine Jordan & Carolina Road Release “True Grass” Video
Next Jerry Lee Lewis To Perform At Schermerhorn