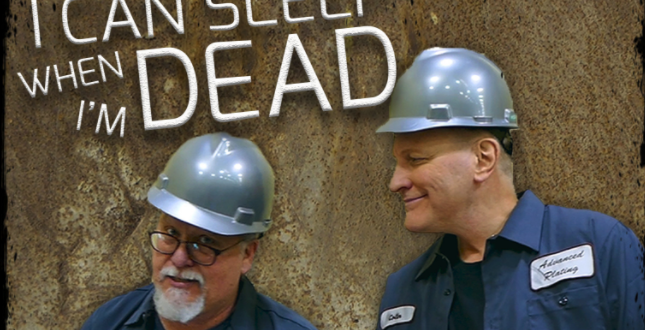 In 1992, Collin Raye had a career-defining 3-week No. 1 hit with the Max T. Barnes and Skip Ewing penned ballad “Love, Me.” The same year, “Love, Me” was nominated for CMA Song of the Year but lost to Vince Gill’s “Look at Us” penned by Max T.’s father, Max D. Barnes. 25 years later, the song is celebrating 4,000,000 broadcast performances as noted by BMI. (photos below)

“Recording and filming this track was an absolute blast. Whenever Max and I get together you know you’re in for some trouble!” said Collin Raye.

“Collin changed my life 25 years ago when he recorded ‘Love, Me,’ and this video is just two old buddies having fun. I invite you to laugh with us, or at least at us!” added Max T. Barnes. “I’m the short one!”

About Max T. Barnes
Max T. Barnes is a hit singer/songwriter and the son of hit songwriter, Max D. Barnes. He wrote his first major smash at the age of 19, Vern Gosdin’s “Way Down Deep,” and has been topping the charts ever since writing “Let Go of the Stone” (John Anderson), “At the Sound of the Tone” (John Schneider), “Before You Kill Us All” (Randy Travis) and “That’s How Your Love Makes Me Feel” (Diamond Rio) to name a few. “Love, Me,” the career launching hit for Collin Raye scored Max T. a CMA Song of the Year nomination but the award that year went to his father, legendary songwriter Max D. Barnes for “Look At Us” (Vince Gill). Between Max T. and his late father they have written 33 #1’s and sold nearly 70 million records.

Max T. has most recently scored a cut on Trace Adkins new album titled I’m Gone and tours frequently in Australia, Ireland, Belgium, Scotland, England, Sweden, Norway, Canada and the U.S. His new projects include a duet with Irish superstar Jonny Brady, a U.K. released single, “Hen Party” and a new single and video with Marty Haggard called “Way Back In The Mountains” a duet their fathers, Max D. Barnes and Merle Haggard, wrote over 20 years ago. He also produced a new album for Bobby Bare featuring all new songs and an appearance by Chris Stapleton on an amped up new version of “Detroit City”.

About Collin Raye
Collin Raye’s searing ballads and electric performances have been captivating country audiences for more than 25 years. With 16 No. 1 hits, 24 top 10s and ten Male Vocalist Of The Year nominations, Raye has clearly emerged as one of the great voices of our time. The De Queen, Arkansas native rose to fame in 1991 with the timeless number one hit, “Love, Me.” In 1994, his music video for “Little Rock,” led to over 100,000 phone calls to Alcoholics Anonymous from addicts seeking help. “Not That Different,” was a song that pleaded for tolerance, and “I Think About You” (awarded as “Video Of The Year” by the Academy of Country Music in 1997) exposed exploitation of women and children. His latest album projects include His Love Remains, his first inspirational hymns album, as well as Still On The Line, a tribute album to Glen Campbell. In 2014, he released his moving autobiography, “A Voice Undefeated.” He has topped the charts with songs such as “In This Life,” “I Can Still Feel You,” and “That’s My Story.” He is currently performing across the U.S. on The Big 25 Tour. For more information on Collin Raye and upcoming tour dates, visit collinraye.com.

Previous Lady Antebellum To Perform For Fans And Hilton Honors Members In Nashville As Part Of Music Happens Here
Next Kris Kristofferson and Emmylou Harris Live Video Performance of “The Pilgrim, Chapter 33.”