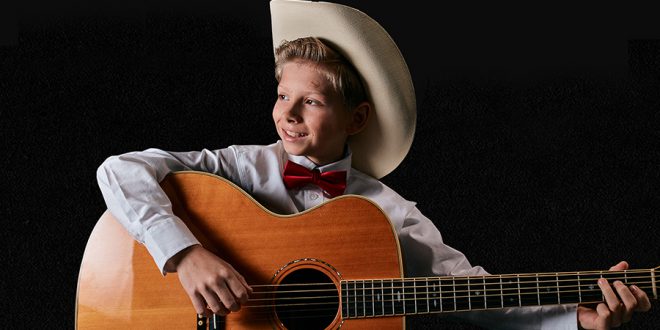 Leading with his chart-rising original single, “ Famous” – penned by Tyler Hubbard, Corey Crowder (Chris Young, A Thousand Horses), Sarah Buxton (Chris Lane, Keith Urban), and Canaan Smith (Florida Georgia Line, Love & Theft) – and closing with the Country giant’s gospel classic “ I Saw the Light,” his generation-jumping track list not only shows the dynamic range of the 11 year old’s musicality, but also the full-fledged authenticity of his headline-worthy talent. The Tennessean gave an exclusive First Listen of the latter, plus fast-talking “Yo Da Lady Who” yesterday (7/19).

“I can’t believe my first EP is out,” Ramsey admits. “Some of these songs I’ve been singing before I could talk, so I can’t wait for you to hear them.”

Bringing his down-home spice to Nashville, the Golconda, IL-bred native treated industry guests, family, and friends, to an epic SUPERBOIL complete with a full crawfish and barbecue feast yesterday (7/19). Hosted at the Clementine, a gorgeous renovated church originating in 1889, Ramsey stayed true to his roots with all the fixings to create a lively atmosphere. In addition to joining guests to try his hand at cornhole among other backyard games, he also took the stage set beneath a picturesque stained glass window to premiere tunes from his FAMOUS EP.

Returning to the Grand Ole Opry stage tonight, he’ll step into the hallowed circle after making his debut to a standing ovation in April. In celebration of his launch, he’ll also follow-up his performance with an in-store appearance at the Opry Store.

The internet phenom first caught attention worldwide after his impromptu performance of “Lovesick Blues” (Hank Williams, Sr.) in an aisle at his local Walmart in Harrisburg, IL, went viral ( 54.7M+ views.) Just released today, the official music video spotlights Ramsey’s signature yodel in his impassioned rendition of the classic, which was filmed inside Nashville’s iconic Country Music Hall of Fame and Museu m.

Music editor for Nashville.com. Jerry Holthouse is a content writer, songwriter and a graphic designer. He owns and runs Holthouse Creative, a full service creative agency. He is an avid outdoorsman and a lover of everything music. You can contact him at JerryHolthouse@Nashville.com
Previous Veteran Opry Performer Tim Atwood Takes His Turn In The Spotlight
Next Sister Hazel Gets Some Help From Heavy-Hitter Nashville Songwriters on “Wind”