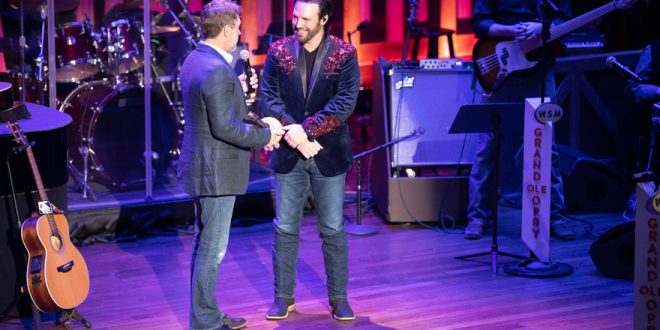 Longtime Opry favorite Mark Wills became the newest member of the Grand Ole Opry last night during a sold-out performance at the Ryman Auditorium. Craig Morgan, a 10-year Opry member, officially welcomed Wills to the Opry family.
“It’s a great honor to be a part of this family as the cornerstone of our format and I’m proud to be here to welcome you,” said Morgan. And as a longtime friend he jokingly added, “And I love knowing I will forever be embedded in your mind as part of your memory from tonight!”

“I thought many, many times what it would be like to have a good friend be the one who would induct me as a member of the Opry,” shared Wills. “Craig, you are a hero of mine and I will forever be indebted to you.” Prior to his induction moment Wills reflected on getting “to make my own piece of history and it couldn’t happen at a better place than the Ryman.”

“Vince Gill said it so well when he invited Mark to join the family last month, citing Mark as being one of the Opry’s great supporters and a proponent of what the Opry stands for,” began Sally Williams, senior vice president, programming and artist relations/Opry general manger. “We are glad to call him family, and look forward to Mark entertaining Opry audiences and sharing his passion for the Opry for years to come.”

Music editor for Nashville.com. Jerry Holthouse is a content writer, songwriter and a graphic designer. He owns and runs Holthouse Creative, a full service creative agency. He is an avid outdoorsman and a lover of everything music. You can contact him at JerryHolthouse@Nashville.com
Previous “Vince Gill and 5 Guitar Players He’s Crazy About” Show
Next Dustin Lynch Scores His Sixth #1