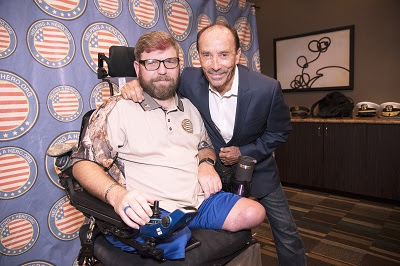 America’s patriot and Grammy-winning artist, Lee Greenwood, has been honored with the Point of Light Award. Created by the administration of President George H. W. Bush, the Daily Point of Light Award honors individuals and groups creating meaningful change in communities across America.

Greenwood, who was recently named one of Billboard’s 100 Greatest Country Artists of All Time, has done over 30 tours with the USO and is an ambassador for non-profit organization, Help A Hero. Despite his great musical success, Greenwood says he is most proud of what he can give back to his country and those who have served.

“I count it a privilege to be in a position to brighten a veteran’s day or help unite the country after a tragedy like 9-11 and I am honored to be named as a Daily Point of Light by our beloved president, George H.W. Bush,” said Greenwood. “Knowing that this award is the largest organization dedicated to volunteer service, I consider this to be one of my most prestigious honors.”

Greenwood was presented the Points of Light Award on August 21 by the Chairman of Helping a Hero, Chris Daniel. Points of Light works in partnership with companies, foundations, government agencies and nonprofits to achieve the greatest impact.

“Lee inspires me and I still get goosebumps every time I hear him sing or watch him present the keys to a specially adapted home to one of our wounded warriors,” said Meredith Iler, Chairman Emeritus of Helping a Hero. “It was an honor to nominate Lee for the Daily Point of Light award and to surprise him with the Daily Point of Light Award alongside dozens of wounded warriors who love and respect him.”