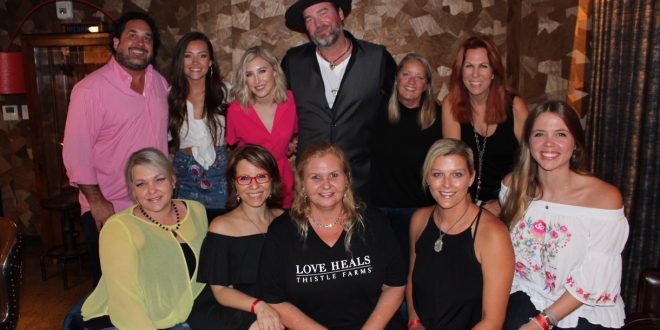 Last night Lee Brice hosted the second of his three-show “Lee Brice Presents: The Analog Series” with special guests Liz Rose, Victoria Shaw and Maddie & Tae. The event, emceed by Amy Paige of 97.9 The Big 98, raised funds for local charity Thistle Farms.
“I was introduced to music by my mom and her sisters. There’s not a time I don’t remember them singing Gospel songs; they even came to Nashville when they were teenagers to record a Gospel album. They all had an artistic influence on me, though it was my Aunt Henrietta specifically, who embodied a soulfulness that still informs my music today,” shares Lee.
“I’m so grateful for the influence of these women in my life. They’re like family to me,” he adds. “Every one of these Analog shows has a meaningful theme. With this show in particular, I wanted to shine a bright light onto the incredible artistry brought to Country music by so many women, and honor their fearless, pioneering spirits and creative contributions. To say I was honored to be on stage with Liz Rose, Victoria Shaw and Maddie & Tae last night is an understatement. Their talent is just mind-blowing.”
Jennifer Clinger of Thistle Farms was on hand at the event to share her story and thank the audience and artists for their support on behalf of Thistle Farms and the women it serves.

The third and final show in the series — which has already sold out — will take place Monday, October 1 when Lee and several friends pay tribute to Route 91 Festival’s one-year anniversary.

SESAC serves as the official sponsor of the Analog Series, along with the venue itself, Analog At Hutton Hotel.

Music editor for Nashville.com. Jerry Holthouse is a content writer, songwriter and a graphic designer. He owns and runs Holthouse Creative, a full service creative agency. He is an avid outdoorsman and a lover of everything music. You can contact him at JerryHolthouse@Nashville.com
Previous 52nd Annual CMA Awards Nominations Announced
Next Song Suffragettes Raise $10,000 For Legal Defense Fund