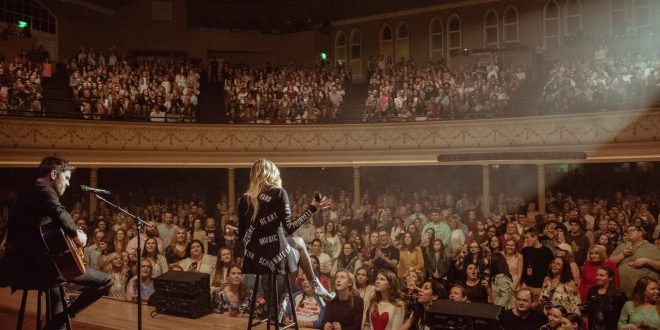 Kelsea Ballerini Powers Through The Flu In Ryman Performance

Despite fighting the flu, Ballerini thrived from the palpable energy of the sold-out Mother Church, with tunes such as the anthemic title track and the lyrically cheeky “I Hate Love Songs” resonating perfectly with the lovestruck holiday. Celebrating her first Valentine’s Day as a married woman, she also welcomed her husband, MORGAN EVANS (Warner Music Nashville), as a surprise guest. Introducing an unreleased song by Evans titled “Dance With Me,” he sweetly admitted that it was the first song he had penned for Ballerini just six weeks after dating. The fitting duet marked the first time the couple has publicly performed together.

The Country star ended her show with a stirring encore of her hit, “Love Me Like You Mean It,” from her GOLD-certified,album THE FIRST TIME. Stripped from the “bells and whistles,” Ballerini returned to her pure singer-songwriter roots with only her acoustic guitar to accompany her. “I want it to be me and you, because it’s always been me and you,” she humbly shared onstage, before leading an impassioned sing-along off-mic in closing.

Back on the road tomorrow (2/16), Ballerini will continue THE UNAPOLOGETICALLY TOUR at Ruth Eckerd Hall in Clearwater, FL, before headlining Universal Orlando Resort’s Mardi Gras celebration Saturday (2/17) inside the Music Plaza in Orlando, FL. Guests with a park ticket or Annual Pass are expected to enjoy a lively constellation-themed parade with performances by bands from the Big Easy prior to showtime.

With 12 cities sold out, limited tickets remain for the nationwide trek in Clearwater, FL (2/16), Columbus, OH (2/22), and Santa Barbara, CA (4/25). Ballerini is also slated for big international appearances during C2C: Country to Country 2018 in London, United Kingdom (3/9) and Dublin, Ireland (3/11); CMC Rocks in Ipswich, Australia (3/17 and 3/18); and a continuation of THE UNAPOLOGETICALLY TOUR with a sold-out stop at Metro Theatre in Sydney, Australia (3/20).