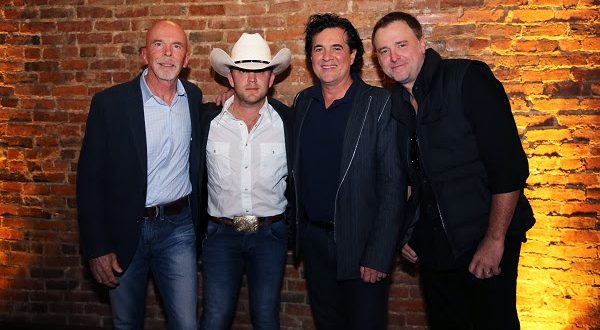 Seven-time chart-topping singer/songwriterJustin Moore joined industry friends and family last night in Nashville to celebrate multiple career milestones. An inaugural artist signed to The Valory Music Co. in 2007, under the Big Machine Label Group umbrella, the Arkansas native has sustained a hearty run of hits across four studio albums. The event honored PLATINUM certifications for JUSTIN MOORE and OUTLAWS LIKE ME as well as the GOLD certification of OFF THE BEATEN PATH. Additionally, the catchy “Bait a Hook” achieved PLATINUM sales status for the Big Machine Music writer, who penned the track alongside Jeremy Stover and Rhett Akins.

“It’s crazy to think about,” said Moore. “The fact that the fans have stuck with me through a decade in this business is overwhelming. I am so thankful for their support as well as Country radio’s. Let’s do this again in 10 more years.”

Moore recently scored a No. 1 on both the Mediabase and Billboard Country Airplay charts with “Somebody Else Will.” Written by Kelly Archer, Adam Hambrick and Tebey Ottoh, this is the second single from KINDA DON’T CARE to summit following the rise of “You Look Like I Need a Drink.”

The accolades culminated with the announcement that Moore’s songs – “Backwoods,” “Lettin’ the Night Roll” and “Till My Last Day” – have each reached 1 million spins while and “Small Town USA” exceeds 2 million, earning him four BMI Millionaire Awards.

Laughter and cocktails flowed as Moore, his manager L3 Entertainment’s Peter Hartung and Big Machine Label Group President/CEO Scott Borchetta swapped stories. The highlight came as they recalled the time that Moore moved to home Arkansas after 10 years in Nashville … without letting Borchetta or the label know.

“Scott called me two years after I lived in Arkansas,” laughed Moore. “He was asking me when I moved and that’s when I knew I could do my job from anywhere. It’s been really important for my wife Kate and I to raise our babies around family and the way we grew up.”