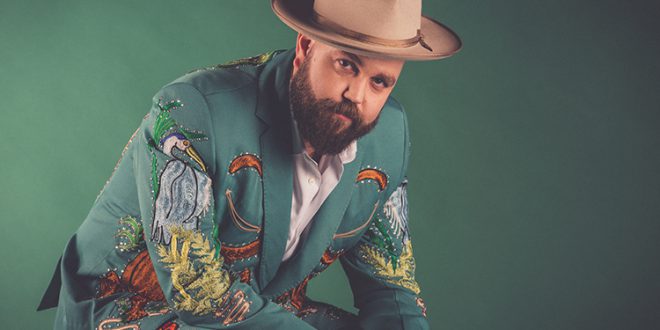 Joshua Hedley Set To Debut New Album, And On The Grand Ole Opry

The song is second track unveiled from Hedley’s debut album Mr. Jukebox, which will be released April 20 on Third Man Records and is now available for pre-order.

In celebration of the record, Hedley will make his debut on the Grand Ole Opry on album release day—a lifelong dream for the acclaimed Nashville musician and songwriter. Additional tour dates include a series of performances next week at SXSW as well as festival stops at High Water Festival, Stagecoach and Pickathon and headline shows at Brooklyn’s Union Pool, Nashville’s The Basement East and L.A.’s The Roxy and Hi Hat. See below for full tour details.

Produced by Skylar Wilson and Jordan Lehning, the 10-track album features nine original songs as well as a version of “When You Wish Upon A Star.” In addition to Hedley on vocals and fiddle, the album features Eddie Lange on steel guitar/guitar, Jeremy Fetzer from Steelism on guitar/baritone guitar, Michael Rinne on bass, Jon Radford on drums/percussion and Micah Hulscher on piano/organ.

Of the album, Hedley comments, “It’s not a throwback. It sounds new because it is new, and it sounds the way it sounds because it’s the only thing I know how to do. I can’t write a song that sounds different. Classic country is like a suit. Nothing about a men’s suit has changed in like 100 years. Classic never goes out of style. Something can’t be a throwback if it’s never been out of style.” He continues, “I just want people to remember they have feelings, and that they’re valid. Not everything is Coors Light and tailgates. There are other aspects of life that aren’t so great that people experience. They’re part of life, part of what shapes people. And that’s worth noting.”

A Florida native, Hedley felt inexplicably drawn toward the fiddle as a child. He first asked for one at age 3. His mom listened to Neil Diamond and his dad listened to Otis Redding––they didn’t see the request coming––but when he asked again five years later, they were struck by the longing’s staying power and, at 8 years-old, he finally got his hands on his very own instrument. He went on to perform at the local VFW and American Legion and, at 12, joined his first band. His bandmates were in their 40s. Around the same time, Hedley visited Nashville with his parents and immediately knew that he belonged. At 19, he made the move and began sneaking into Robert’s Western World––too young to drink legally and too wild to care. Hedley went on to become a featured performer and in-demand sideman at the now legendary spot and, ultimately, a well-respected frontman. Armed with an easy croon and prodigious fiddle playing, he became known by peers as the Mayor of Lower Broad. In the years since, he’s performed with artists including Jonny Fritz, Justin Townes Earle and more and was featured prominently in the the 2015 documentary, Heartworn Highways Revisited.

Music editor for Nashville.com. Jerry Holthouse is a content writer, songwriter and a graphic designer. He owns and runs Holthouse Creative, a full service creative agency. He is an avid outdoorsman and a lover of everything music. You can contact him at JerryHolthouse@Nashville.com
Previous “High Valley: Farmhouse Sessions” Just Released
Next CMA Songwriters Series To Host Larry Gatlin, Terry McBride, Aaron Tippin and Charlie Worsham Performance