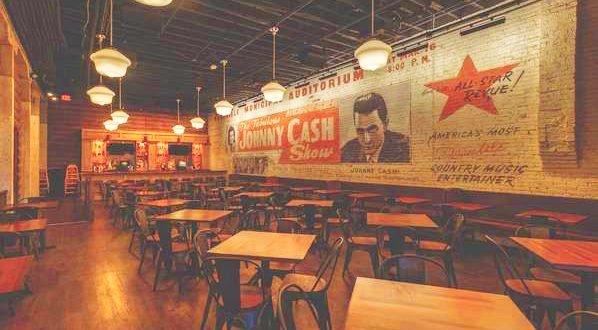 Both the Cash and Carter families, including John Carter Cash, Tommy Cash, Joanne Cash and Carlene Carter were present on Wednesday morning with Icon Entertainment Group Founder Bill Miller for the grand opening of Johnny Cash’s Kitchen & Saloon in downtown Nashville.  Located at 121 Third Avenue South, this 15,000 square foot food and beverage establishment features the best in country cooking served up by Nashville’s longstanding southern food institution Swett’s.
“We are thrilled and honored to introduce Johnny Cash’s Kitchen & Saloon to the world,” says Icon Entertainment Group Founder Bill Miller. “It’s one of the most unique venues anywhere, anchored by one of the biggest and most beloved personalities in the history of entertainment. Johnny’s legions of fans from around the world will be immersed in the hospitality and ambience they’d find if they had been to Johnny and June’s home for dinner.”
“I am thrilled about the new restaurant, Johnny Cash‘s Kitchen & Saloon,” says John Carter Cash. “Dad‘s favorite foods in the world are exactly what you will find on the menu. I remember my father and mother bringing me to Swett’s when I was but a small boy. Southern cooking was my father’s very life blood and tradition, and I firmly believe it does not get any better than this.”
“It has been a pleasure working with Bill and his team to train the staff at Johnny Cash’s Kitchen & Saloon,” says Swett’s owner David Swett. “We have enjoyed helping to put this restaurant together and know it will be a success for downtown Nashville.”

Music editor for Nashville.com. Jerry Holthouse is a content writer, songwriter and a graphic designer. He owns and runs Holthouse Creative, a full service creative agency. He is an avid outdoorsman and a lover of everything music. You can contact him at JerryHolthouse@Nashville.com
Previous Four Day Passes For CMA Fest 2020 On Sale Friday, Aug. 2
Next The Lumineers Announce 2020 North American Tour