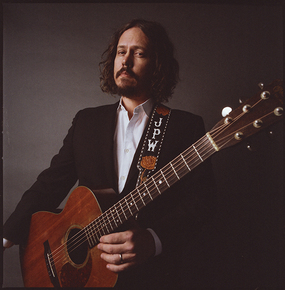 In celebration of Valentine’s Day, Grammy Award winner John Paul White is premiering “I Wish I Could Write You A Song,” the new track from his upcoming solo album The Hurting Kind (out April 12 via Single Lock Records). Listen to the song and share it with a special valentine from White via his website at http://smarturl.it/JohnPaulWhiteWish.
“This is me putting the rose between my teeth and trying to write a romantic song,” explains White. “Trying to measure up to this feeling that I have in my heart and not being able to get it on the page is the most endearing part of the sentiment. I’m a huge fan of Roy Orbison and always felt like he allowed himself to go as big and grandiose as the song wanted him to be. I don’t think there are a lot of people in popular music, especially men, who allow that to happen. So I was fully willing.”
The Record Store Day vinyl edition of The Hurting Kind, featuring a bonus 7” record, is available starting April 13 only at independent record stores. See recordstoreday.com for more information.
Leading up to the sessions for The Hurting Kind, White was inspired by artists like Jim Reeves, Patsy Cline, Roy Orbison, Chet Atkins and Bill Porter. Drawing on these timeless influences, White sought out classic writers like Whisperin’ Bill Anderson and BobbyBraddock to collaborate with. “Coming out of each and every one of these situations, I got a resounding thumbs-up that I was on that right track,” says White of the collaborations. “I didn’t need anybody else’s approval after that.”
The Hurting Kind was recorded at Sun Drop Sound, White’s new home studio that he converted from an old, turn-of-the-century home in the historic district of Florence, AL, and at legendary FAME Studios in Muscle Shoals, AL.  The record was co-produced with Ben Tanner (Alabama Shakes) and features additional contributions from a core group of musicians including Jon Radford (Leigh Nash, Odessa) and Reed Watson on drums, Pat Bergeson (Chet Atkins, Emmylou Harris) on electric guitar, Jon Estes (Robyn Hitchcock, Kesha) and David Hood (Muscle Shoals Rhythm Section) on bass and Lillie Mae (Jack White) on fiddle, plus guest vocals from Lee Ann Womack and background vocals from Erin Rae and The Secret Sisters.
With The Hurting Kind, White draws on the lush, orchestrated music made in Nashville in the early 1960s, writing about overwhelming love, unraveling relationships and the fading memory of a loved one.
“I approached this album differently on the songwriting side before I ever got into the studio,” says White. “I really wanted there to be a torch song quality to it, the classic timeless quality. To not be afraid of the big note, and not be afraid of the drama.”
White grew up in tiny Loretto, Tennessee, and now lives in Florence, Alabama, not far from Muscle Shoals. He has cultivated his career in Nashville for two decades, first as a songwriter for a major publisher, then as half of The Civil Wars—a groundbreaking duo that won four Grammy Awards before disbanding in 2012. White’s collaborations include contributions to recordings by Rodney Crowell, Hiss Golden Messenger, Rosanne Cash, Jason Isbell, Candi Staton and Emmylou Harris, and production work with Lera Lynn, Lindi Ortega, Dylan LeBlanc, Penny & Sparrow and Donnie Fritts’ Oh My Goodness, which also marked White’s debut as a producer. White is also a partner in Single Lock Records, an independent record label based in Florence, Alabama.

Music editor for Nashville.com. Jerry Holthouse is a content writer, songwriter and a graphic designer. He owns and runs Holthouse Creative, a full service creative agency. He is an avid outdoorsman and a lover of everything music. You can contact him at JerryHolthouse@Nashville.com
Previous Ryman Auditorium Wins 9th Consecutive Theatre of the Year Award
Next Trisha Yearwood Releases 1st Full Length Record Since 2007