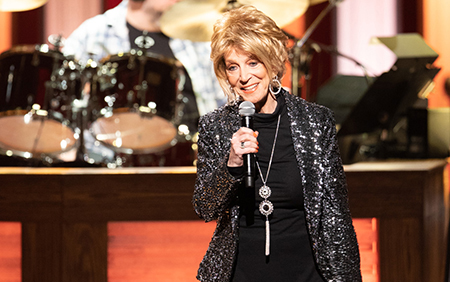 “Miss Country Soul,” Jeannie Seely, known for her husky voice and 1966, Grammy-winning hit “Don’t Touch Me,” celebrated 52 years as a member of the Grand Ole Opry family this past weekend, an achievement attained by only a handful of country artists. Standing on stage in the sacred circle that upcoming artists dream of, the same iconic wooden circle onstage that holds special memories of all of those who have performed on the hallowed circle.

Seely is loving life and excited for the future. She recently has gotten back into songwriting and is very proud to have the recent #1, “Like I Could,” on the Bluegrass Charts recorded by Rhonda Vincent. The single was co-written with Erin Enderlin and Bobby Tomberlin.

Seely has no plans of slowing down, in the Spring of 2020 she’ll be releasing a brand new album, “An American Classic,”  and continues to host her weekly “Sundays With Seely” on Willie’s Roadhouse on SiriusXM and proudly host Opry segments and perform each week as well as tour nationally.

“The Opry has been in my life as far back as I can remember, about 4 years old, and except for a brief time in Los Angeles, I have either been there or listened every weekend!  I remember when Jack Greene and I were touring together, we would pack up as quickly as we could after a show to get on the bus and turn on the Opry as we travelled home. We were listening on the night before Stringbean and his wife were murdered and heard him perform and heard the response of the audience that night.  These are treasured memories,” states Jeannie Seely. “It has often been said among Opry artists and musicians, you are either Opry or you’re not, there doesn’t seem to be a way to explain it, we’d just rather be there! The Opry is a way of life to me, another home and that’s where my heart is. You can bet I’ll be listening when the day comes I can’t be there!”

“Seely is a fixture of the Opry both onstage and backstage,” said Dan Rogers, Opry VP and Executive Producer. “From her performances in the Opry’s famed circle to her witticisms in the wings to the way she nurtures the next generation of Opry stars, she’s one of a kind. Happy 52!”

Music editor for Nashville.com. Jerry Holthouse is a content writer, songwriter and a graphic designer. He owns and runs Holthouse Creative, a full service creative agency. He is an avid outdoorsman and a lover of everything music. You can contact him at JerryHolthouse@Nashville.com
Previous Craig Morgan Reunites With Broken Bow Records
Next CMA Hosts Country Music Hall of Fame Class Of 2019 Inductees