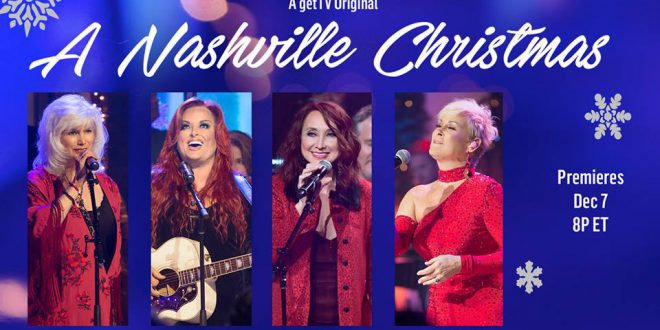 Among the show’s highlights are Wynonna’s solo performance of “O Holy Night”; Emmylou’s “Coat of Many Colors”; Wynonna and Emmylou’s first ever duet “Beautiful Star of Bethlehem”; Lorrie’s rendition of “The Christmas Song”; and Pam’s “Santa Claus Baby.”

We sat down to talk with Emmylou Harris about what her Nashville Christmas is like and all about the show! Check it out.

GetTV will be airing its first-ever original program, “A Nashville Christmas” special on December 7, also starring Wynonna, Pam Tillis, Lorrie Morgan and Vincent & Dailey. Did you enjoy the shoot and working with everyone?

I did enjoy it. The way they set up the show at Skyville Live, all the artists when not performing sat out in the audience at tables, so you really get to see the performance. Then you just get up from the table when it is your time to perform. It was a wonderful band, all the musicians were folks that I worked with before. So it was nice to be able to be apart of the audience as well as a performer.

How do you feel about being a part of the first “Nashville Christmas” Special?

I am hoping that it becomes a Nashville tradition. We have plenty of artists who live in this town that can do it.

Did you get to choose to perform the “Coat of Many Colors” song and does it have a special meaning to you?

It does have a special meaning. I hadn’t really thought of it as a Christmas song until a few years ago when I did it with Rufus Wainwright for a Christmas special that they do to raise money in memory of their mother Kate. But it has always been my favorite Dolly Parton song. I actually recorded it on my very first album for Reprise Records way back in 1975. But I had not performed it very much until I did it with Rufus. I like the idea of bringing it into the fold and having people think about another layer of meaning to that song.

Let’s talk a couple of minutes about your own impressions of Christmas ,Do you have a family tradition you love to do each Christmas?

Since I have been here in Nashville, I really set roots here. The house I live in now I have been living in since 1990. In 1993 when my father passed away, my mother came to live with me. She lived with me for over 21 years. She really made that house a home and it just became the gathering place for everyone in our family as well as friends that had become like family that might not have any place to go. It’s just a big gathering of people to celebrate the fact that we are all here together. We have some good food and I suppose that is the tradition. My house has gratefully become the gathering place.

I can’t really remember. I was just so excited every Christmas for everything that I got. There’s just something about under the tree and santa claus. I held onto that until the very last possible moment, that there was a santa claus.

Well of course everyone likes “It’s a Wonderful Life.” But there is a wonderful more recent movie with Nicolas Cage called “The Family Man” that I think that is a sweet movie. My first 3D movie was “Polar Express,” which was wonderful to see in 3D.

Everyone cooks something. I make a thing called broccoli nut casserole. I actually don’t like it. It’s one of those things that you make with cream of mushroom soup in one pot and pour it into a casserole dish. It is easy and everyone loves it except me. Even though I am usually a vegetarian most of the year, I will eat the turkey. We get it from Trader Joes or Whole Foods. I love Pumpkin Pie. It’s probably the only time I get to eat it. I love to eat the leftover pie for breakfast, it is the best.

Is Bonaparte Retreat doing anything special for the holidays? Will there be another Holiday Shopping and Adopting again this year?

I take a few shifts at the shelter during the holidays when our volunteers go out of town. We are so grateful for people’s support. There is unfortunately always going to be homeless dogs. It is so gratifying to be able to take these dogs that were going to be euthanized. My heart is with the older dogs, they make such wonderful pets because you know their personality and they just enrich your life. You can go on the website https://www.bonapartesretreat.org/ and Kelly is great about keeping everybody posted about special things going on.

Finally name three things you are thankful for this year?

I am thankful that my two daughters seem to be happy in their lives, I am grateful that Bonapartes Retreat is doing well and that we are able to rescue these dogs and find them homes, it’s such a blessing in my life, and i’m grateful to be able to still do what I love, not just the dog rescue, but still make music with people that I love. As Willie Nelson says ”make music with my friends.” I am a very very lucky person.

Emmylou Harris recorded her first album in 1969 and has released many popular albums and singles over the course of her career; a 13-time Grammy winner, she was inducted into the Country Music Hall of Fame in 1988. One of her most memorable recordings is a Christmas album, Light of the Stable, released in 1979, with its title track featuring backing vocals by Dolly Parton, Linda Ronstadt and Neil Young, along with such holiday classics as “Silent Night”, “O Little Town of Bethlehem” and “The First Noel.”

To view a complete schedule of all of getTV’s “Most Wonderful Month of the Year” special programming, including additional airings of “A Nashville Christmas,” please visit get.tv.