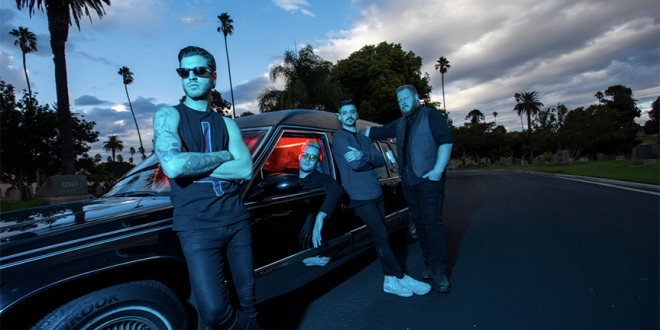 Ice Nine Kills are currently on the co-headline “March Into Madness” tour with From Ashes to New. The band will appear at Cannery in Nashville, TN on 4/9.

“We have been itching to get back on the road and play the most requested songs from The Silver Scream,” said INK’s Spencer Charnas. “The fans can be sure that INK and FATN have some killer surprises up our sleeves for a tour that will most certainly be remembered.”

Ice Nine Kills are returning to the road after wrapping up a stint on tour with Atreyu last fall.

The band is supporting its most recent release The Silver Scream, which bowed with nearly 19,000 copies sold during its first week of availability. The album has passed 50,000 units total consumption thus far. Each of the 13 songs on the conceptual effort pays homage to classic slasher films of the ‘80s and beyond. The new single “A Grave Mistake” is currently at #33 at radio and was a “Most Added” track at the format. It stormed out of the gates and amassed 30 early supporters. SiriusXM named the band “A Sirius Future Five Artist of 2019” and the song has continuously topped the “BIGUNS” countdown.

Music editor for Nashville.com. Jerry Holthouse is a content writer, songwriter and a graphic designer. He owns and runs Holthouse Creative, a full service creative agency. He is an avid outdoorsman and a lover of everything music. You can contact him at JerryHolthouse@Nashville.com
Previous Lorraine Jordan & Carolina Road Stay On Top With “True Grass”
Next Listen: Steve Earle & The Dukes Sing With “Old Friends”