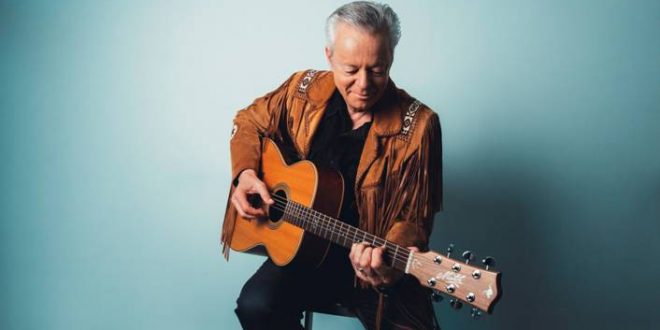 Grammy-nominated guitarist, composer and performer, Tommy Emmanuel is gearing up for the release of his next album, Accomplice One—out January 19, 2018 on CGP Sounds and distributed by Thirty Tigers—along with a run of February headlining tour dates, featuring one of the album’s special guests Rodney Crowell, that will be stopping locally in Nashville on February 17 at the Ryman Auditorium. Tickets are on sale now.

Produced by Emmanuel–whom is distinguished as one of only five musicians handpicked by his mentor, Chet Atkins, as a Certified Guitar Player (CGP)–Accomplice One opens with “Deep River Blues” featuring Grammy-winning Americana raconteur Jason Isbell who says, “If you like guitar playing, it simply doesn’t get any better than Tommy.” Accomplice One is a testament to Emmanuel’s musical diversity, the range of expression that stretches from authentic country-blues to face-melting rock shredding, by way of tender and devastating pure song playing. The songs are a mix of new takes on indelible classics and brand new originals from Tommy and his collaborators.

Country and bluegrass legend Ricky Skaggs lends his mandolin and unmistakable voice to “Song and Dance Man,” a chronicle of a life lived for the next show. Tommy and Rodney Crowell’s “Looking Forward to the Past” could’ve topped the country charts in another era, with TOMMY’s propulsive rhythm supporting Crowell’s sly lyrics while his tasty lead playing weave in and out. Accomplice One, full of standouts, delivers a jaw-dropping rendition of “Purple Haze” with Dobro master Jerry Douglas that captures all the fire and energy of the Hendrix original as the two modern masters push each other to new heights with each raunchy slide and bend. “You Don’t Want to Get You One of Those” showcases a sly vocal and acoustic duet with Dire Straits’ legend Mark Knopfler. “Djangology” is a gypsy jazz treat cut live in Havana, Cuba with Frank Vignola and Vinny Raniolo and “Rachel’s Lullaby” reunites TOMMY with Hawaiian ukulele masterJake Shimabukuro. The song, written for TOMMY’S youngest daughter, shows him continuing to find inspiration from an evergreen source–his love of his family. See below for full track listing.

Emmanuel recently wrapped a fall run of tour dates with celebrated bluegrass mandolinist David Grisman, with whom he released a collaborative album entitled PICKIN’ on November 3, marking the first recorded collaboration between these two musical titans. The 12-song album—available on Grisman’s own Acoustic Disc record label—not only reflects Emmanuel’s signature classical, Americana, folk and roots stylings, but it also artfully merges jazz rhythms, jamming, and unpredictability in the mix. PICKIN’ follows EMMANUEL’s album, LIVE! AT THE RYMAN (released May 19 via CGP Sounds), which captures a special night of music at the historic Ryman Auditorium in Nashville on February 27, 2016.