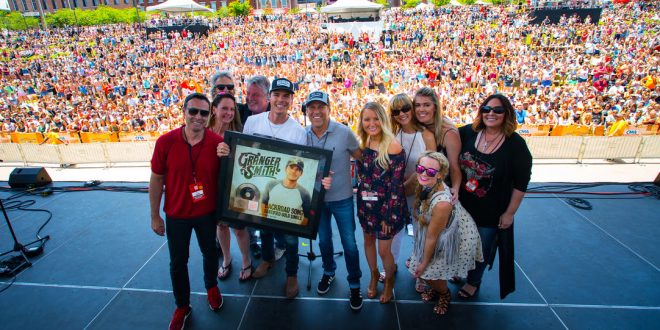 This past Friday, Wheelhouse Records artist Granger Smith accepted the RIAA GOLD certified plaque for his No. 1 hit”Backroad Song,”  one of the Top 10 most played country singles of 2016 according to Mediabase. Alongside reps from BBR Music Group and BMG, his band, crew and support team, Smith received the honor in front of record crowds during his Riverfront Stage performance at this year’s CMA Music Fest in Nashville, TN. “It has been a childhood dream of mine to achieve a national No. 1 song,” says Smith. “Now, with this GOLD certification, that dream has been amplified. To my incredible Wheelhouse team, the confidence of country radio, my incomparable band, crew and support team, my family and friends, and all those who make up Yee Yee Nation – I thank you from the bottom of my heart.”

“The minute I met Granger and his team, I knew it wasn’t a matter of IF but WHEN he would get his first Gold record,” says Jon Loba, EVP, BBR Music Group.  “His commitment to music, touring, alter-ego Earl Dibbles Jr. and feeding his rabid YEE YEE Nation fan base made his signing to BBR/Wheelhouse our fastest ever.  The entire label KNEW we would have long-term success with him, but you can’t predict the short-run.  Typical for Granger, the bar was set high.  A #1 airplay single and Gold record on his first single with us was his hope.  I am so happy that with the help of our fantastic partners he once again accomplished exactly what he set out to do. Platinum record, here we come!”

Adding to the excitement, Smith’s newly released “Happens Like That” impacted radio yesterday and was the #1 most added song at Mediabase with 59 first week stations. The single is the first off his anticipated sophomore Wheelhouse album, slated to come out this fall.

Over the course of his groundbreaking career, Granger Smith has amassed a massive and rabid audience now known as “Yee Yee Nation” built through heavy touring and grassroots fan engagement. He now has a social media following of over 5.5 million and nearly 100,000,000 views on YouTube alone. Flagship artist on BBR Music Group’s Wheelhouse Records, Smith broke onto the national scene with Remington, an album that garnered him the No. 1 single “Backroad Song.” Smith was also awarded a BMI Country Award for writing, producing, publishing and performing “Backroad Song” and followed it with the Top 5 hit, “If The Boot Fits.” “Backroad Song” was One of the Top 10 Most Played country singles of 2016 according to Mediabase. Granger was nominated as Best New Country Artist for the 2017 iHeartRadio Awards and was included in the 2017 crop of artists honored during the CRS “New Faces” show. Smith’s current single “Happens Like That” was the #1 most added song on impact day (6/12/17) and is the first off his next full length album this fall. He will take a break from his national, headlining tour this fall to go on the road with Luke Bryan on the “Huntin’, Fishin’, And Lovin’ Every Day Tour.”